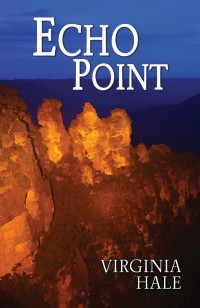 Virginia Hale’s debut novel Echo Point is a quick and well-written read which packs substance and heat and has a sweet slow-build romance.

Our protagonist is Bron who, after many years away, has returned to Australia after her sister Libby’s death. Bron has spent the last three months trying to come to terms with her grief and her new role as the legal guardian to Libby’s young daughter, Annie. However, Libby’s best friend, Ally Shepherd, is soon released from jail and moves in with Bron and her family. At first, Bron does not trust Ally and does not understand the dedication that Ally inspires from Bron’s stepmother, Jackie and half-brother, Daniel. Ally and Bron seem like polar opposites but they soon grow to admire and depend upon each other as they take care of Annie and start forming a relationship with each other. This novel is quiet and isn’t heavily plot-driven at all but I think that really works here because the focus is on the well-developed characters and the familial and romantic relationships.

The romance between Bron and Ally is a comfortable slow-burn. They have known each other since they were young and Ally even has a longstanding crush on Bron. I really like that these women learn to appreciate each other as both people and lovers. I am also very appreciative of the fact that Bron and Ally act like adults and although there is ample tension and heat between them, the novel avoids unnecessary drama or angst. Most importantly, I like that their relationship encourages them both to grow as characters. I also admire the fact that Hale features a romance between older women (Bron is 40 and Ally is 33) because so many books tend to focus on younger characters.

This novel is much more than just a romance. Echo Point also sensitively and realistically explores family relationships, forgiveness and healing, and learning to cope with loss. Bron’s family is trying to live with Libby’s death while also supporting young Annie who deals with the loss of her mother and the changes in her life in a way that seem realistic for her age and situation. Meanwhile, Ally has many issues to deal with and she is attempting to readjust to life in society after her time in prison. I love the found family trope and I particularly like the positive and realistic way that Hale presents this concept through Bron’s family’s loving acceptance of Ally as well the actual dynamics of Bron’s family.

The characters in this book are memorable and well-developed. However, I think that perhaps Daniel and his girlfriend could have been trimmed for cohesiveness. I know that seemingly brash Ally who is actually very loyal and has a heart-of-gold will quickly become the favorite for many readers. But, I love quiet and conservative Bron because she is relatable as she attempts to manage the changes in her life as best as she can. Her struggles with balancing her ambitions and taking care of Annie are really well-done. Surprisingly, I also really like how Hale writes Bron’s six-year-old niece, Annie. I think that children are often written too maturely for their ages or overstay their welcome. But, I am pleasantly surprised at how sweet and realistic Annie is and her relationships with both Bron and Ally are heartwarming.

Echo Point is a great debut from Virginia Hale and I would definitely read it again. If you like well-written romances and realistic characters, add Echo Point to your to-read list!

Rebecca Cave is a Creative Writing student and freelance proofreader. Come say hi to her on her brand new blog: https://rebeccareviews.tumblr.com/