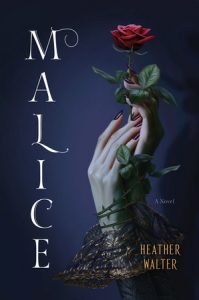 Malice is an F/F retelling of “Sleeping Beauty” with a Malificent/Aurora romance, and Malificent (“Alyce,” in this case) as the main character. This is a premise that I know a lot of Lesbrary readers will be excited about! It’s a duology, and this volume is mostly setting about Alyce’s journey to becoming the character we’re used to from the original story. This is an adult fantasy book, but the characters are in their late teens/early twenties, so it would appeal to YA readers as a crossover book as well.

Although I was intrigued by the premise, and I think this will appeal to a lot of readers, it didn’t quite land with me. The first 80% of the book moved quite slowly–it’s essentially a training montage of Alyce discovering her true powers and building them, as well as starting a friendship with Aurora. The last chunk of the book is explosive, moving the story forward at a sprint. I see other Goodreads reviews that were unhappy with where the story went, but I think it was inevitable when you consider the source material.

Unfortunately, I don’t feel like those two parts really meshed well together. Having a slow pace works if the story is meant to be slice of life and atmospheric–and a lot of this space is used to establish the worldbuilding–but it felt awkward to suddenly crash into the action, especially when some of it changed the tone of the story. (It’s hard to review this book without alluding to the ending!) I would have liked more time to deal with some of those elements, especially the one that affected Alyce the most on a personal level.

(Major spoiler:) I was surprised–and a little disappointed–when Alyce got… inhabited? by the spirit of an evil Vila, and that’s what spurs her to villainy. I would either have liked to see that happen earlier in the book and see her grapple with that and slowly succumb to it, or I would like to her snap because of her own experiences–which would be a believable character arc. Instead, it feels like her actions aren’t really hers, which gives them less weight and makes the transformation less interesting or surprising. (end spoiler)

As I mentioned, this is a fantasy novel that spends its time worldbuilding. We learn about the area’s history, its political machinations, and the magic system. This isn’t something that personally appeals to me as a reader, mostly because I have a terrible memory. One interesting note for queer readers is that this world is accepting of same-sex couples for the most part, except that the royal family requires M/F couples for heirs. (There aren’t any trans characters in the book, at least as far as I noticed.) (Content warning/spoiler:) An F/F couples jumps off a cliff because of their family not accepting them. (end spoiler)

I think my favourite part of the story was Aurora. With a “Sleeping Beauty” F/F retelling from Malificent’s perspective, I would expect Aurora to be all sunshine–that’s a great dynamic to play with, and it’s the default fairy tale princess personality. Instead, the first time we see Aurora, she’s in a shockingly low-cut dress, scandalizing everyone at the ball. She is defiant and critical of how the realm is managed (by her parents and their counsel). She is attracted to Alyce not just in spite of her darkness, but partly because of it. When Alyce accidently curses a royal fountain to spew smoking mud, Aurora declares it her new favourite thing. I liked this unexpected characterization of the princess, but we don’t see that much of her.

One of the things I was tracking throughout the book was how the one Black character (as far as I noticed, at least) was depicted. (Spoiler:) Unfortunately, she is killed off. Just like killing off the One Queer Character in a series, regardless of the reasoning, can be painful for queer readers, this is… not what I was hoping for. (end spoilers)

Overall, there are some strong elements to this story, but some of the issues I had with it overshadowed that, especially in the pacing. I believe I’m in the minority on this one, though, so I still recommend picking it up if the idea intrigues you!