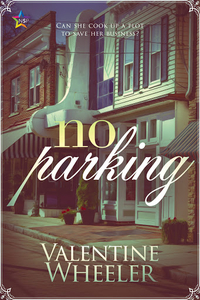 I received an ARC of No Parking by Valentine Wheeler and was instantly intrigued by the description. Older main characters, bi and ace characters, they’re snowed in together? I’ll pick that up! And No Parking delivered. I found it a delightful read that had me cackling with delight as legal shenanigans and small town drama were added to the mix.

Marianne Windmere and Rana Wahbi run neighboring businesses, but both of them think that the other’s customers are hogging their shared parking lot. When a snowstorm traps them both in the building overnight, not only do they find out there’s more to their parking problems than they thought, they both have unexpected feelings ignited. When Marianne’s subsequent investigations into just what is going on with her parking and the building her family bakery has been in for generations kicks up town secrets and drama, Marianne and Rana are left to negotiate not only the future of their businesses, but their growing feelings for each other.

One of the things that I loved best about No Parking is how cute the romance is between the two main characters while at the same time giving them both full and rich romantic histories. Marianne and Rana are both older and both are bi and had been married to men in the past. Rana is widowed and Marianne is divorced and also identifies as ace. Their romance, which starts as soon as they get snowed in together, is very sweet, full of blushing and wanting to spend time together and feeling like kids with a crush, but the story also shows them as adult characters with full lives. Marianne is working towards a more amicable relationship with her ex-husband, and we also meet one of her past relationships that causes her to consider how her life would have gone if things had gone a bit differently. Rana has dealt with her feelings about her husband’s death, and has a whole life with friends and her kids. It was very nice to read a story with a very sweet relationship that didn’t consume their whole lives and where they were mature enough to make thought-out decisions about it.

I also really enjoyed the legal and political subplot. There is something incredibly satisfying to me about see a family that thinks it can run a small town get their comeuppance, and Luke Levent definitely deserved a comeuppance. From the start, there is something slimy about Levanti, who is running for the district House of Representatives seat. He’s incredibly condescending, and from the start it is clear that he is doing something fishy with the fact that he owns part of the building with Marianne’s bakery. The whole reveal process was very dramatic and satisfying with all the plot elements you could desire. Hidden wills! Lesbian lawyers! Non-sanctioned parking signage! It was all here.

An underrated part of romance, and queer romance in particular, is building not only a fantasy relationship, but also a society that the relationship can reasonably take place in. No Parking built a small town that was an idealized version of itself, but is also well within the realm of possibility and hope for other queer women who live in small towns, and it spoke of the support networks of friends and family that are necessary in a small town. Wheeler builds a whole network of queer characters who support Marianne and Rana and who are supported in turn. Marianne’s sole employee is a black trans teen named Zeke, who Marianne gives both a job and emotional support to. Marianne also receives research help from the town’s librarian who is both trans and her ex. When, at the end of the novel, two young ladies wander through the bakery, delighted to know that there is a queer bakery in this town and wondering if they should move there, it shows not only the idea that the threat to the town’s character in the form of corrupt politics has been defeated, but that queer community and support in small towns is viable and necessary.

My only, slight, quibble is that I wish this book would be longer. Marianne would refer to events that happened when her search collided with small town politics that I wish I could have actually seen, like what was clearly a retaliatory visit from the health inspector. Sometimes I would page back when she referred to something, thinking that I had missed it. There was a lot that felt glossed over. But overall seeing all those details would be my preference, and I respect the intent of the author to try to balance the legal shenanigans with the rest of the plot and not let it overwhelm the romance.

In conclusion, I found this book fun, cute, and full of the kind of energy that I need going into 2020. Arrest your corrupt politicians, reach for your ideal relationships instead of society’s, support your community members, and patronize your local queer businesses. 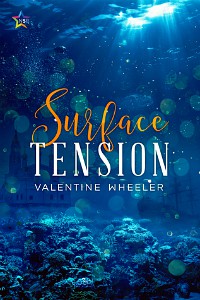