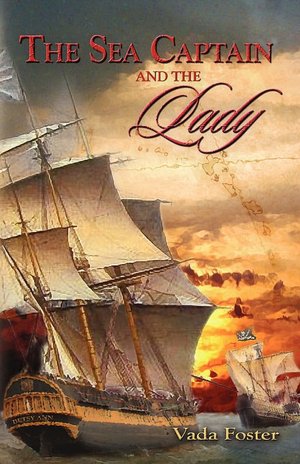 For anyone looking for a novel with a beautiful lesbian love story, complete with seafaring and pirates, then The Sea Captain and the Lady by Vada Foster is the perfect fit. From the beginning she hooked me in; making me care about the two women the story is about.

The Sea Captain opens with Colleen Edwards, a tomboy who loses her mother and brothers to an epidemic. Hating Finishing School with a passion, the young girl is thrilled when her father, Charles, agrees to let her live with him on his ship. She grows into a striking young woman, an amazing sailor respected by the entire crew.

Also in the beginning of the book, we meet Abigail Hume, daughter of a wealthy family, who is forced into marriage to a much older man she doesn’t love. When her husband is killed in an accident just after their wedding ceremony, Abigail’s parents reluctantly allow her to choose her next husband. Her father later is appointed governor of the Bahamas, so Abby and her parents leave their Scottish estate to sail to Nassau.

One day, while docked in Nassau, Colleen goes to the governor’s mansion on an errand for her father and meets the kind and gentle Abby painting on her porch. The two instantly form a sweet friendship, and every time Colleen visits their feelings for each other deepen. After some months, Colleen and Abby finally declare their deep love for each other and want to be together. But soon after Abby is kidnapped by the notorious pirate Jack Rackham and Colleen’s father is wounded trying to save her. So it’s up to Colleen to rescue Abby and put an end to Calico Jack. If they survive, can these two women share a lifetime with each other?

The Sea Captain is written like a sweet, rich musical score. I really felt I was in the Caribbean in 1717, with the way the characters talked and how descriptive everything was without being overdone. The romance is amazingly tender. Abby and Colleen, though fearful of how to stay together, are completely trusting and caring towards each other. Their lovemaking is gentle and pure, and they respect the other and make decisions together. They’re the way a lesbian couple, or any couple, should be.

There are interesting subplots as well. There are actually some snippets from two other women’s perspectives. They are Mary Read and Anne Bonny, two real pirates who worked with Jack Rackham, and were suspected of being lovers. In this book, Mary and Anne are indeed lovers, and they too are struggling to make a life together. This, like Abby and Colleen, has its own complications. Mary has been disguised as a boy from a very young age and is on Jack’s crew, and Anne is Jack’s mistress. If the pirate were to find out of the affair, the consequences could be deadly.

The romances between these two sets of women are connected in a way to make the story gripping. But there are some historical inaccuracies. In real life, Anne and Mary met different fates from that in “The Sea Captain.”, and the epidemic that took Colleen’s mother and brothers never really happened. However, the point of the story was not to be historically accurate, but to make a good read.

Like many lesbians today, Colleen and Abby had to make big changes to live together. And they wondered how people would react if they knew. Colleen was especially hesitant to tell her father, though he’s a very understanding character. Her struggle reflects those of other young women wrestling with the agonizing decision of coming out to their parents. So, many can relate to Colleen and Abby.

The Sea Captain and the Lady is a wonderful story that is an engrossing and interesting read. The historical period and the sailing add flavor to the novel. I highly recommend this book, as Foster did an amazing job, and really put a lot of care and love into her characters and her story.