Fun fact: the first Cassandra Khaw book I read was a paranormal romance called Bearly a Lady, about a bisexual werebear fatshionista. I really enjoyed it! But I found out later that this is very much not Khaw’s usual genre.  They usually write horror and sci fi, and pretty brutal horror and sci fi at that. Although those aren’t my usual genres, I decided to take a chance on this one.

The All-Consuming World is a little bit heist novel, a little bit noir narration, a hint of Lovecraftian, and a whole lot of gritty sci fi. Maya is a rabid dog of a mercenary clone who is ready to fist fight with god. She is entirely, illogically, wholeheartedly devoted to Rita, a mad scientist type. Rita is cold, withholds affection, and is always pulling the strings in an elaborate scheme. She’s manipulative, even cruel, and always five steps ahead of anyone else.

They both used to be part of the dirty dozen (at least, that was the most polite name for them), a group of criminal women. It’s been 40 years, though, since a job went bad and left two of them dead — permanently. Maya is used to waking up in a vat of goo, newly regenerated from her most recent grisly demise, but there are some deaths you can’t come back from. Now, they’ve got to try to get the band back together for one last job.

The universe is ruled by AIs, and Maya and her fellow clones are the last dregs of what passes for humanity. Rita says that the AIs are ready to wipe the last of them out and start fresh — but who knows if you can trust anything she says.

This is a fairly short book at 275 pages, but it packs a ton in. The narration style is distinct. Maya’s POV chapters — which are most of them — use the word fuck about once a paragraph. Throughout the book, Khaw uses really distinct metaphors and similes — sort of like a noir detective story, but with a bloodthirsty futuristic perspective. For example, “the sound unspooled between neurons like a tendon snagged on the tooth of a Great White.”

Also, either keep a dictionary on hand or just bask in Khaw’s superior vocabulary. I kept rediscovering words I haven’t encountered in years, and then bumping into a good chunk I’ve never seen before.

This is definitely a story that throws you right into the world, trusting you’ll pick it up as you go. There are factions of AIs, each with their own values. AI Minds interconnect in a grand conversation. AI have elaborate rules for communication, sampling lines and voices from all of recorded human history: a laugh from Audrey Hepburn, a line from Leonard Cohen. Ageships are sentient ships of unfathomable size and power, capable of swallowing stars.

It’s also got some… unique visuals. Needless to say, the Butcher of Eight’s appearance is just as intimidating as the name. Also, we get a lot of detail of being awake during eyeball surgery, so definite content warnings for gore.

Most of the book is spent in the “getting the band back together” plot, which is good, because it lets us get slowly introduced to a big cast. They are all queer women and non-binary people, with very different personalities. There’s an ethereal, worshipped pop star that literally glows and has multiple mouths trailing down her neck, and a disembodied woman in code corrupting the conversation from within — just to name a few.

But the relationship between Maya and Rita is at the core of the story: Maya can’t seem to control her loyalty to her, even when Rita hurts her and everyone else in her life. It’s also just fun to be in Maya’s head, because she is so out of control: the only time she feels comfortable is when she’s in a deadly fight.

It’s a story about the defiance and audacity of humans, of never knowing when to give up.

This isn’t one every reader is going to love, because it is very gritty and sometimes stomach-turning, but I really enjoyed it, despite it not being a genre I usually gravitate towards. If you can handle nonstop profanity and gore with your existential heist stories, definitely give this a try.

I feel a little “dead dove, do not eat” about this reading experience. I went into it looking for a creepy, unsettling read and then finished feeling unnerved and unhappy about feeling that way. So while I didn’t enjoy this read as a whole, that’s down to my own choices. I also started listening to this in October, when I love reading horror and thrillers, but it expired when I was halfway through and I finished in about a month later. Likely if I hadn’t have had that gap in between, I would have enjoyed it more.

This is a dark academia YA novel about Felicity, who has come back to her exclusive/pretentious boarding school after taking a leave to take care of her mental health. Last year, her girlfriend died in a tragic accident. At the time, she’d been obsessed with Dalloway House’s history, with its murders and rumors of witchcraft. This time, she’s determined to set aside the attraction to witchcraft and concentrate on her studies.

That’s when Ellis shows up: a famous (teen) author who is writing about the Dalloway murders and pulls Felicity in to her research. Soon, she finds herself immersed in a world of magic and murder again, even as Ellis tries to prove the Dalloway “witches” were just ordinary women and that the murders could happen without magic. Felicity has more and more trouble telling reality from fiction, especially as she stops medicating for her psychotic depression (a diagnosis the author shares).

If you’re looking for sapphic dark academia, this definitely fits the brief. Dalloway House is a creepy boarding school, and the students are just the kind of pretentious academics you’d expect from the setting. They recite poetry in rooms lit by candlelight, they write their essays on typewriters and eschew cell phones, and they dress like they’re in a period piece.

Part of the reason I didn’t personally enjoy it was that I have a terrible memory and have a bit of a phobia of it becoming worse, so reading from the perspective of someone who often lost touch with reality was very unsettling. (Again, that’s not a fault of the book, but with what I brought to it.) Ellis and Felicity also have an unhealthy relationship, with Ellis being manipulative and often leading Felicity into dangerous territory for her well being, which was hard to watch, especially as Felicity seems to miss a lot of the red flags.

I don’t want to criticize the depiction of Felicity’s mental illness, because it is own voices, but I will say I was a bit confused comparing the author’s note (and her Goodreads review) with how Felicity is portrayed.

This seems to be a divisive read, but I will say many of the criticisms I’ve read are just of the premise or it being in this subgenre. This is dark academia: of course it has unlikable, pretentious, morally gray (at best) main characters. And no, you should not go to this book expecting a cute F/F romance. That’s not what it’s trying to do.

Despite the fact that I didn’t love it personally, I’d still recommend it to readers looking for a dark academic book. I also recommend reading the Lesbrary reviews from Carolina and Sinclair Sexsmith, who both really enjoyed this one, for some other perspectives! 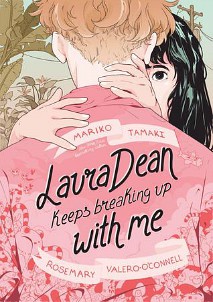 Mariko Tamaki and Rosemary Valero-O’Connell’s graphic novel Laura Dean Keeps Breaking Up With Me is EXCELLENT. It follows Freddy, a mixed-race high-school girl as she gets dumped by the titular Laura Dean for the third time, and it ripples throughout her friendship group.

I’m not gonna lie, I did spend a lot of Laura Dean Keeps Breaking Up With Me yelling first that Freddy deserved better, and then that Freddy’s friends deserved better. The narrative does such a good job of showing why Freddy keeps going back to Laura Dean; she’s magnetic and charming, despite her casual disregard for everything about Freddy that doesn’t involve her. But also the art is fantastic for showing how Freddy’s life revolves around Laura Dean when they’re together (especially in its use of one colour versus the standard black and white art), at the expense of her friends! So even as I admired the story’s craftmanship in how it showed the relationships and the characters’ reactions to them, I was shrieking on twitter about how they made me feel!

Freddy’s narration is witty and sweet – I especially liked her observation that her being able to be humiliated and broken up with in public like her hetero friends is progress, because as a reviewer I feel called out – and the gimmick of writing to an advice column feels simultaneously nostalgic for the YA stories I was reading as a teenager, and as an excellent way to justify both the narrative and the final conclusion that Freddy comes to about her relationship.

(We all saw Laura Dean’s reaction coming, right? And cheered for Freddy doing what she needed to?)

I appreciated it showing that someone can be not right for you even though you love them, and the advice Freddy gets feels simultaneously kind and realistic. And I like that there was so much importance on Freddy’s friends, who all clearly had their own stories going on that intersected with Freddy’s! It worked, especially for Doodle’s storyline, which broke my heart for her.

Laura Dean Keeps Breaking Up With Me is excellent, and if you want something that feels realistically messy and contemporary, with a strong current of friendship running through, definitely pick it up!