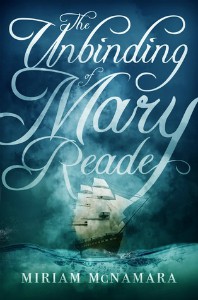 My earliest memories of pirates include Muppet Treasure Island, The Goonies, and the treasure chest at the dentist’s office. Female swashbucklers, however, did not enter my consciousness until much, much later. I lived vicariously through sanitized depictions of redeemable and charming male anti-heroes. If you want more than tired tales of Black Beard or even Calico Jack (featured, of course, in this novel as one  of Anne’s paramours), then you are in for a treat with The Unbinding of Mary Reade.

Miriam McNamara immerses readers into the so-called “Golden Age” (sometime between the mid-17th to the early 18th centuries) of piracy in the Caribbean. Based on the lives of Anne Bonny and Mary Reade, 18th century women who sailed the high seas. Much of what passed for facts on piracy in that era can be taken with a grain or two of salt (or in this case, of sand). Salacious tales of blood-thirsty, unscrupulous plundering of merchant vessels and conflicts with the Royal Navy, were intended to sell books and newspapers. How much of their lives truly happened, I don’t think we’ll ever know for sure. We can, however, through novels such as this one and Bloody Jack, a young adult series by LA Meyer, imagine what their lives were like and what drove them forward.

McNamara opens the story with a heart pumping action sequence as a crew of pirates led by Calico Jack take over the ship. Hidden from view, Mary “Mark” Reade beholds a fiery image of Anne Bonny, her pistol firing and wild hair flying. In that moment, it won’t be the first or the last time that Mary takes a chance on an unconventional choice.

Life in a poor London neighborhood is hand-to-mouth for Mary, the illegitimate daughter of an alcoholic mother. The untimely death of her brother, Mark, son of a long gone, but moneyed father, presses Mary into a role she can’t refuse. She shears her hair and attempts to pass as Mark in order to play his grandmother for financial support. McNamara’s exploration of gender roles, sexuality, and identity flows naturally throughout the narrative. Mary’s journey from hardscrabble city life to her eventual job aboard seafaring vessels alternates with the story’s present-day of 1719. Anne, on the other hand, takes to the seas to escape an abusive marriage and eke out freedom and fulfillment however she can.

Anne and Mary develop a strong, Thelma & Louise kind of friendship, that buoys the pair in world dominated by men. In addition to nuanced explorations of gender, we also follow Mary’s developing attractions for her childhood friend, Nat, and Anne. McNamara weaves well-placed details and develops supporting characters to bring the realities of life at sea and society (as a woman) to life. Readers familiar with their story will still find much to enjoy in this engaging drama.

If you’d like to dive deeper into the history of female pirates, check out these books: