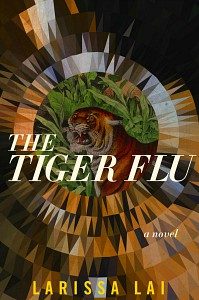 I should say upfront that I don’t read much sci-fi. It’s definitely not my genre of choice, so I am unfamiliar with the conventions and the tropes, and the general methods of worldbuilding. The only reason I picked up The Tiger Flu by Larissa Lai was that it won the Lambda Literary Award for lesbian fiction this year. A hint of gay is enough to get me picking up any sort of book – and I am unbelievably glad that in this case, I did.

The Tiger Flu is set in a future overrun by its eponymous disease, forcing the population into quarantine levels, with the maligned and anarchic Saltwater City at the centre. In the outermost quarantine ring is the Grist Village, a secluded commune of women exiled from Saltwater City due to their genetic mutations: they are a society built around “doublers” – women with the ability to clone – and “starfish” – those who are able to regrow their own body parts, and so donate them to Grist women who need them. This is the home of one of our perspective characters, Kirilow Groundsel, a groom who cares for her starfish lover, Peristrophe. When an invader from Saltwater City brings the tiger flu with them, a weakened Peristrophe succumbs to the disease, sending Kirilow on a revenge quest to both kill the responsible “Salty” and find a new starfish to protect the Grist way of life.

In Saltwater City, Kora Ko helps her uncle grow potatoes for their tiny family, hoping to prolong their lives even though both her brother and uncle show signs of the tiger flu. Although the illness mostly affects men, Kora is still in danger of contracting it – and so the family decides to send her to the Cordova Dancing School for Girls, also a commune of sorts in the depths of the city, where girls are taught to dance and thieve. Kora only wants her family reunited – but perhaps her brother, K2, is more dangerous to her than she thought.

Something which I appreciated greatly about Lai’s writing was that none of the worldbuilding was explanatory. In fact, very little explanation is given, and so it is mostly up to the reader to deduce what is going on and how the characters fit within this dirty, diseased world. The prose is enough for this, with everything being slightly off-kilter, enough that you come to understand what has happened to the world in this year of 2145. It was hard for me initially, it being a bit difficult to get into the sci-fi headspace, but I did find it consuming in the best of ways.

Something which I found it hard to get past was that the plot was put in motion by the death of Peristrophe; is it an example of Dead Lesbian Syndrome? On the one hand, it means that the narrative as a whole is framed by Kirilow’s love for Peristrophe – it is what haunts and drives her, and leads to almost every inciting decision she makes. On the other hand, there is something a little Willow/Tara about it all, where Kirilow’s development as a character is only kicked into gear when her lover is killed. For a lesbian literature award winner, I’ll admit that I was expecting the relationship to feature in a different way. It was startling to have Peristophe’s death hit the page so quickly, and with no real sense of justice eventuating from it.

What I did appreciate was that the women were allowed to be – and I love the opportunity to use this word – feral. In this dystopic world, the women protect themselves from corrupt and diseased men by being violent and ugly, unwashed and aggressive. The Cordova girls are frequently referred to as “stinky”, and Kora’s own scalp crawls with lice. Kirilow isn’t afraid of blood, and readily performs surgery and amputations. It’s always refreshing to read women in this way, especially when beauty and perfection are shown to be corrupt facades. I read this as a sharp assessment of womanhood under patriarchy, in a book full of sharp assessments on a number of topics.

From the sanctuary of her Grist Village, Kirilow isn’t even aware of what a man is, except for stories she has heard about how “Salties” reproduce, a relic of how society used to be. There is something a little cisnormative about this, with the Grist process of cloning – or “doubling” – still being dependent on wombs. In a world more sharply divided into men and women, I was a little surprised that there wasn’t more discussion around the multifaceted nature of gender – especially considering this is sci-fi.

All of that said, I am still grateful that I read The Tiger Flu. It is a singular book, which constructs a confronting world filled with complex characters who don’t always behave in the way you’d think. Even in the world that Larissa Lai creates, one which is harsh and at times grotesque, these characters are driven by love, in their own ways. The prose is arresting, and the world is consuming, and it is all a sort of welcome fever dream. As someone who does not read sci-fi, I am glad I read this one – and I think you will be, too.