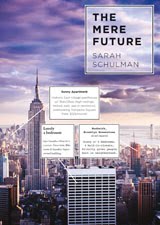 This was a puzzling book to me. The Mere Future takes place “In the future, when things are slightly better because there has been a big change.” I was expecting a dystopia, but I finished the book still not certain whether things were, in fact, slightly better. “The big change” is a political one, involving housing costs plummeting (eliminating homelessness) and a ban of chain stores and public advertising in New York. Also, the “Media Hub” provides almost all employment.

The characters, however, seem to be sacrificed to the satire. The main characters are unlikeable and self-obsessed. Their relationship is dysfunctional to say the least. This isn’t inherently bad, but I didn’t feel any personal investment in them or their relationship. They seemed to just be vehicles for information about the reality of the “big change”.

The plot also seems to be secondary to the message. Not much seems to happen in the first two-thirds of the book, other than revealing the consequences of the “big change” (which is fine, because it’s a small book and there’s enough there to pull it along), but then suddenly there’s a murder and trial involving side characters. It seemed sudden. I suspect it was to emphasize the downsides of this “big change”, but to me the consequences didn’t seem to naturally follow.

This isn’t a bad book by any means. It’s written well, and it’s definitely clever. I spent most of the book feeling like it was going over my head. And although I wasn’t into the “dystopic” (or utopic) elements to begin with, they stuck with me. I found myself thinking about them after I finished the book, and discussing them with other people. I’m still debating the merits of the “big change”, and it’s a change from the usual dystopias I’ve read, which are unequivocally bad.

This is the first Sarah Schulman book I’ve read, and I definitely plan to read more, but this one isn’t a perfect fit for me. I definitely think there are lots of readers who would really enjoy it, however, especially if you’re looking for an intellectual read.

As a side note, the main characters are a lesbian couple (of course, that’s why I’m reviewing it!), but as I said to my partner while reading it “You don’t really want them on our team…”