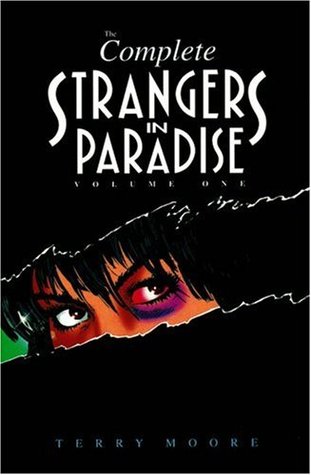 I’ve heard so much about Terry Moore’s Strangers in Paradise over the years, especially this year as he released a special box set edition of the entire series for its 20th anniversary, that approaching it started to seem intimidating, and also complicated. I’ll probably lose some nerd cred for saying this, but compilations of long running comics have always confused me: there are so many different volumes, and different versions of those volumes, that I never know which are the best or right ones to get. My library’s holdings of it are shoddy at best, and I obviously can’t afford the $100 box set. But last month when I was perusing the graphic novel section of my local bookstore and found a $4 copy of Strangers in Paradise: Volume One, there was pretty much no excuse for me anymore.

It’s a thin collection, including the first three comics in the series, along with a short vignette and some of Moore’s sketches and original inspirations for the characters. We’re introduced to our two main ladies: Francine, dark haired, curvy, heart of gold, and Katchoo, scowly but funny, angry, artsy, with a mess of blonde hair almost always covering too much of her face. Best friends since high school, the story really begins at some indeterminate point of their adulthood. Roommates, Katchoo is clearly in love with Francine and always has been, and has to gut wrenchingly watch as Francine, clueless and naive, clings from one horrible guy to the next. The plot in this first volume mainly deals with the latest bad egg in Francine’s life, who is really, really a bad egg, and the revenge Katchoo takes for messing with her girl. We also meet a couple of side characters, including the adorable and lovable David, a fellow artsy type who wants to woo Katchoo until she not so politely informs him that he’s not her type, but who sticks around anyway, because that’s the kind of guy he is.

While I enjoyed this volume, it’s hard to review it on its own because I know that it’s just the tip of the iceberg, and all I’m left feeling is that I want more! I want Francine to get some sense knocked into her; I want Katchoo to have to stop pining. But it is remarkable that in such a short book, less than 100 pages, I already do feel attached to these characters Moore has so lovingly crafted: while Francine’s misdirected clinginess is excruciating, you somehow still like her and root for her to get over all of this, and while Katchoo’s rage can be over the top, you see her heart and know that you’re on her team from page one. Plus, in one of the very first scenes, we see her sleepily take out a gun from her bedside table and literally shoot her ringing alarm clock. It’s hard not to like a girl like that.

But my favorite thing about the story so far is actually Moore’s illustrations. While done in black and white and not overly complex–most of Strangers in Paradise was self-published–his depictions of both women are realistic in a wonderful way I can’t completely describe. We see Francine in particular in various shades of undress, and each time, her body is imperfect–thick thighs and bum, a perfectly normal stomach–but yet she is still completely and utterly sexy. It’s refreshing, and lovely, and I look forward to much, much more in my near future when I get my hands on Volume Two.