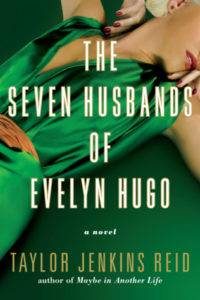 Monique Grant has just been given the opportunity of a lifetime and she has no idea why. Reclusive Hollywood idol Evelyn Hugo has decided that it’s time for the world to know her story – the full, unabridged version – but she refuses to tell anybody other than Monique. Knowing this could completely change her life, Monique gratefully accepts and begins the task of recording Evelyn Hugo’s story. Still, the question lingers: why Monique? And why now?

I’d been wanting to read this book for quite some time before I finally got my hands on it, and let me just say that it was completely worth the wait.

The Seven Husbands of Evelyn Hugo is a fictional biography of the titular Evelyn Hugo, an aging Hollywood star who rose to fame in the 1950s. Her story is both exhilarating and heartbreaking. From a far-too-young age, Evelyn is forced to make decisions that could potentially harm herself or others in an effort to remove herself from the poverty and abuse of her childhood. Her story takes us from her poverty-stricken childhood to the lap of luxury of her adulthood without missing a single untoward detail. She makes for a very ethically ambiguous protagonist, with deep, ever present flaws. She’s also a woman who has been through hell and back more than once, and who stirs up a great deal of empathy within the reader.

One of Monique’s first questions to Evelyn is, “Who was the actual love of your life?” This is apparently a popular question within Monique and Evelyn’s world, and one that Evelyn refuses to answer right away. Soon, though, it becomes clear that it was actually none of her seven husbands. You see, Evelyn Hugo is bisexual, and there was one woman she loved above anybody else throughout the course of her life.

This is the true heart of Evelyn’s life and her struggle. Her desire to be with the woman she loves mixes with her fear of being outed and losing everything she’s worked for. This fear often causes her to make frustrating decisions, ones that might be difficult to understand from a modern perspective. Still, it’s clear no matter where she is in life, who she is married to, or what she’s doing who her true love is, and how desperate she is not to lose her.

Monique, the woman writing Evelyn’s story, is just as complex – though maybe not in the drastic ways that Evelyn is. While she’s getting to know Evelyn, she also struggles with her own failed marriage (to which she has yet to receive closure) and a career that hasn’t gotten her as far as the wanted to be. While I couldn’t help but love Evelyn despite it all, Monique was easy to fall in love with. She’s relatable, flawed, and struggling in ways that most of us do. She is also written in a deeply emotive way that often had me reaching for the tissues, even in scenes that aren’t necessarily overly emotional.

While I cannot recommend this book enough, you should be warned that this book deals with a myriad of potentially triggering issues, such as emotional and physical abuse (spousal and parental), homophobia, internalized homophobia, racism, and misogyny. All of these issues are dealt with tactfully and respectfully, though, and never feel as though they have been included simply for shock value. They make sense in the context of the story and of the worlds in which Evelyn and Monique live.

I truly cannot express how deeply this book made me feel. It is a true tour de force that must be read to be fully understood. Pick this book up as soon as you can.