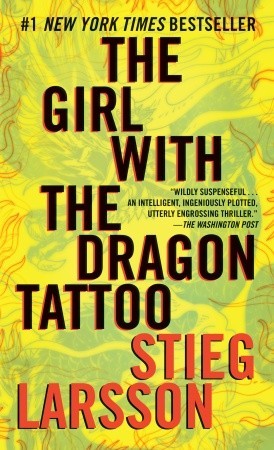 So… before we get started, there are a few things I want to make perfectly clear:

Does The Girl With The Dragon Tattoo qualify as lesbian literature? I mean… not in the strictest sense. (Clearly, right?) But there is the matter of the secondary protagonist, Lisbeth Salandar, who is far and away the most interesting character in the entire series of books.

Here’s how Lisbeth’s sexuality is described:

Salander – unlike Mimmi – had never thought of herself as a lesbian. She had never brooded over whether she was straight, gay, or even bisexual. She did not give a damn about labels, did not see that it was anyone else’s business whom she spent her nights with. If she had to choose, she preferred guys–and they were in the lead, statistically speaking. The only problem was finding a guy who was not a jerk and one who was also good in bed; Mimmi was a sweet compromise, and she turned Salander on. They had met in a beer tent at the Pride Festival a year ago, and Mimmi was the only person that Salander had introduced to the Evil Fingers.* But it was just a casual affair for both of them. It was nice lying close to Mimmi’s warm, soft body, and Salander did not mind waking up with her and their having breakfast together.

Speaking of which: trigger warnings. There are graphic descriptions of rape and other sexual violence. There’s murder. There’s animal abuse. There’s child abuse. Lisbeth is described (in passing) as “anorexic-looking.” If you know that you’re very sensitive about these topics, I recommend that you avoid this book. And definitely avoid themovies.

On the whole, I enjoyed The Girl With The Dragon Tattoo. It falls in the category of crime thriller, which I don’t often read, but the journalist-turned-detective thing appealed to me. (Did I not mention the plot yet? It’s a murder mystery that takes place in early 2000s Sweden. We follow recently disgraced political journalist Mikael Blomkvist as he takes on the case of a teenage girl who disappeared without a trace 36 years prior.) The plot is twisty, but not in a unfollowable way. And there’s plenty of action, in multiple senses of the word.

My one pet peeve with the book was how freaking often Larsson sent his characters to go get coffee. Like, every other page. Hooray for characters exhibiting true-to-life human behavior, but, really? Is it really, truly necessary to provide evidence of their caffeine addictions in such banal, repetitive, frequent detail? I almost prefer the remorseless, brutal misogyny. Almost.

*Sadly, the “Evil Fingers” is not a euphemism for any sort of lesbian sex act – it’s just the nickname for her group of friends. Missed opportunities! Alas!