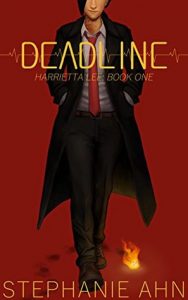 Harrietta Lee, or Harry, is a witch excommunicated from the magical community due to a checkered past and a lot of baggage. Her main goal is to make rent on time with by using what magic she has left to help people. One of these people is Tristan, an apprentice of the famous Meresti family, whose leader is Miriam, a former friend and part of Harry’s baggage. He lost a very important object and needs Harry’s help to find it, but there’s a lot more layers to this quest than a simple a find and retrieve mission. Harry has to grapple with a past she never truly healed from and hopefully not lose herself in the process.

The mystery was well done and never felt it dragged or took away from what I felt was interesting and engaging about Harry and her personal problems, because these two things were not separate entities. As the mystery unfolds, so does Harry’s baggage. As we learn more about Miriam, Tristan, Harry’s sister Luce, and her new demon friend Lilith, we learn more about the plot of this book, as well as the overarching series, that feels intriguing and satisfying.

The characters feel complex and I enjoyed learning about each one. Miriam has a duty to her family, but she is also a person with her own needs and wants, and in addition to that wants to do right by Harry. Luce loves her sister dearly, cares and worries about Harry greatly, but she also has her own life and career. Lilith is fun and mysterious, but there are hints of something deeper we have to yet to learn.

The world building felt real and I left this book wanting to explore more of it in the rest of the series. One of the most important things to world building is that it works with the characters and plot instead of standing separately. Here, the author does a great job of using the world to inform the character’s motivations and drive the conflict of the story. As you learn more about the world, you also learn more about Harry, the mystery, and her friends.

Overall, this is a fantastic first book to a wonderful series. After I finished it, I immediately read the next two books. I highly recommend this to anyone who enjoys urban fantasy.