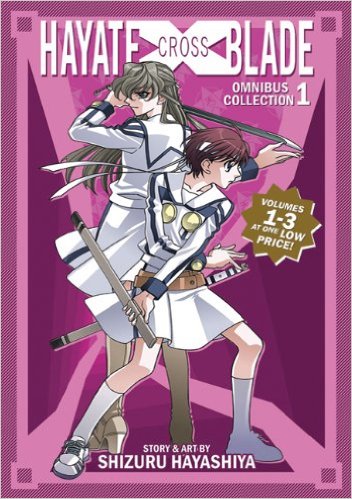 I’ve only read a handful of manga, but every time I do I find them completely engrossing. So of course I’ve been trying to make my way through the yuri manga that is available in English. I know, though, that there is context to manga in general as an art form and yuri in particular that I am missing, because I’m not very familiar with Japanese storytelling tropes. That’s my disclaimer: I can only approach this from my own perspective.

With that in mind, I found this story a little baffling. From what I understand, it’s fairly common at least in Japanese stories for girls to have crushes on each other and even romances that aren’t taken seriously outside of school.  And for the most part, that seems to be the sort of relationships that are happening in Hayate X Blade. Girls are teamed up in a school dueling competition, and they may develop a sort of relationship, but those are mostly treated lightly or as jokes in the story. There are also constant jokes about girls being “pervy” for wanting to sleep in the same bed as another girl, or really wanting any sort of physical relationship. On the other hand, the main character has lots of women who want her to be their wife, so who knows.

There is a lot of slapstick humor, though the duelling plot takes itself pretty seriously, and sometimes that works and sometimes it doesn’t. What really grated for me was that the main character teams up with an older girl who treats her like dirt most of the time. This is used for comedic effect, but basically she’s constantly getting punched out by this girl. I was willing to overlook that as hyperbole for the sake of the joke, but I’m still not personally a fan of reading one-sided relationships. It became harder to ignore, though, when one volume has a subplot about a girl who’s also being beaten up by her older duelling partner, except that her storyline around violence was taken seriously, completely glossing over the earlier instances. (Until suddenly that violence was also seen as comedic?)

There are a lot of characters introduced, and I was intrigued them. Clearly the next volumes will have this larger cast moving together in a more complex way, and I appreciated that despite new characters being added often, they were all distinct enough in personality and appearance that I was able to remember them and tell them apart. And though distinct, they’re not over-exaggerated or stock characters: they seem dynamic and rounded despite not getting a lot of time on the page.

I can tell that the series is going to improve from here, but I don’t think I’ll be continuing, because I don’t really want to read about relationships between girls being the punchline.