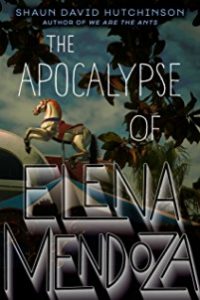 [Please note: this novel contains occasional depictions of violence and this review mentions these in the first and final paragraphs]

Like its eponymous heroine, The Apocalypse of Elena Mendoza defies categorisation. Hutchinson’s novel never doubts the reader’s intelligence and jumps right into the centre of events at the start. Elena Mendoza is introduced as a sixteen-year-old bisexual Latina woman working at a Starbucks in a small town in Florida, who witnesses a teenage boy shoot her long-time crush and abruptly learns she has the power to heal people. The crush is a blue-haired artist called Freddie who unwittingly becomes part of Elena’s journey along with Elena’s best friend Fadil, a kind and thoughtful Muslim boy. Everyone who is exposed to the mystery of Elena’s healing ability offers her opinions on how to solve the puzzle and who to help with her power, while Elena is most concerned with keeping her loved ones safe and not hurting anybody, while also trying to figure out if Freddie maybe likes her too now. A side note to all these extreme events taking place early in the story is that Elena was the product of a virgin birth when her mother was a teenager, with science proving Elena was a statistical anomaly and was conceived through parthenogenesis. Elena has been bullied and stigmatised her entire life as a result of her famous history, which all leads her to question whether these otherworldly occurrences are miracles, science, coincidence, or something else entirely.

A novel with plot points this complex even just at the beginning of the narrative is bound to deal with countless themes, and Elena Mendoza does not disappoint there. The book trusts the reader to have the patience and focus to follow the various characters and story points and at various times Elena’s first-person narrations discusses the significance of religion, science, and ethics in the matters at hand. A big part of Elena’s growing bond with Freddie is the two of them debating and exploring different understandings of why Elena can heal and when and whether she should be healing people. There are times when the book comes off a bit patronizing, with Elena’s self-righteous rants about how to be a good person and treat other people fairly, but this could arguably just be intended as the character’s perspective rather than the author’s.

And despite the Big Idea monologues sometimes verging on being sanctimonious, for the most part Elena is a compelling, likeable and relatable main character who more than deserves her own young adult novel to lead. Elena herself points out that if her powers are God-given, she is an unexpected vessel as a queer woman of colour; the same is unfortunately true of YA protagonists. Similarly, the religious, big-hearted and open-minded Fadil is a wonderful foil to Elena’s sometimes pessimistic, doubtful and misanthropic tendencies. Their loving interfaith, interracial friendship as it is portrayed in the novel is as refreshing as it is rare.

Elena’s bisexuality and interest in Freddie is an important and key element of the story, without reducing either character to the role of pursuer or love-interest. The often prickly and inconsistent interactions the two girls have as a result of extreme circumstances are not romantic in any traditional sense. The way Freddie and Elena are forced to confront their preconceived ideas of the other and listen to uncomfortable truths explodes old notions of how intimacy and love are formed, and the novel and their bond are both better for it.

This novel is not exclusively young adult, or fantasy, or a queer love story, or a meditation on how to be a good person. It is all of those things and a lot more, all crammed into a relatively small amount of pages. Do note that the novel contains brief references to domestic violence and racism as well as the aforementioned gun violence. Ultimately aside from the odd preachy moment, the book is an excellent piece of writing, exploring important themes through engaging with very likeable and relatable characters.