Down Among the Sticks and Bones follows twins Jacqueline and Jillian down an impossible staircase they find in a trunk in the attic. The staircase leads them to the Moors, a world of magic and horror, where the girls avoid werewolves and drowned gods. The Moors is a place these two unusual girls can find a home—but it’s a dangerous place, too, and that’s a very dangerous thing to forget.

It’s a quick read with sharp, distinct characters and lyrical prose that uses familiar figures and concepts in unique ways. The world feels very real. Seanan McGuire has a way of outlining just the right details that the imagery feels complete. I don’t know if this world has constellations. Like Jack and Jill, I would be too distracted by the huge, dripping ruby of a moon. The Moors is a world of horrors, werewolves, and vampires, and the humans that make up the bulk of their diet. Meanwhile, the doctor who revives the dead with lightning energy is a hulking figure with a scar around his neck. That made me laugh, a play on the common misconception that Frankenstein is the monster.

It’s also a world made up of people. Characters act in ways real people would. A well-meaning gesture by the protagonist might be harshly denied because a one-scene character has a sharper understanding of the consequences. Main characters can be thoughtless, vain, or impulsive. That level of flaw and nuance keeps the story feeling grounded despite the fantasy setting.

This is an almost incidentally queer book in a very meta way. The underlying concept of the series is that each child’s other world is their home. It isn’t always easy, but they can belong there. A queer girl like Jack wouldn’t feel at home in a world that rejected an essential part of her. I found it refreshing that Jack’s sexuality was a realization for her but never a reveal or a problem. Sometimes it’s nice that a girl can have a girlfriend without fuss being made.

The second book in the Wayward Children series, Down Among the Sticks and Bones can be read before or after Every Heart a Doorway, but I wouldn’t recommend reading only one. The ending will hit you like a sledgehammer. 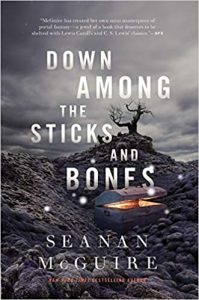 For any of you not familiar with Seanan McGuire’s work, she is a veritable master of remixing fairy tale tropes and patterns (and other genres too), on the same level as someone like Neil Gaiman, while of course giving it her own twist every time. In this case, the main two characters are twin sisters Jacqueline and Jillian, who later take on the names of Jack and Jill. In this review, the name used for each character is the name they used at that time in the story. I personally am not familiar with the nursery rhyme and so can say with full confidence that you don’t need to know it in order to enjoy this book, but I expect many of its strands are woven in throughout. On top of that, McGuire draws from classic horror fare, as the main chunk of the story sees the two siblings in a world ruled by a vampire and a mad scientist facing off in a personal rivalry from across the Moors. And so the stage is set.

McGuire is excellent at invoking specific visuals and scenes we are all familiar with: the castle in the marshes, Dracula’s brides, the lightning coming down from the thunderous clouds to power the scientist’s experiments in his remote and ramshackle wind mill. She manages to ensure these classic elements don’t overpower the story by providing the two main characters with a very modern world background: their parents wanted a classic son and daughter. When they ended up with two daughters, they forced the twins into extremely strict binary gender roles. This means that both sisters could just embody half of their identity, with Jillian only being allowed tomboyish behaviours and Jacqueline always being dressed in extravagant dresses she is warned stringently against dirtying – to the point of developing germophobia and mysophobia.

When they fall through a portal into the world of the Moors, they are for the very first time offered a choice on this aspect. It shouldn’t surprise the reader that they choose the opposite of their experience so far, with Jack joining Dr. Bleak as his apprentice in resurrection and Jill staying with the Master to become his eventual daughter / bride. This still feels like a choice between two strict gender roles though, and it’s hinted throughout the text that the only way for both sisters to fully become themselves is to be allowed through their own choice to embrace their whole selves rather than mashing these two sides against each other.

Another way that McGuire manages to set this work apart from more traditional pastiches and celebrations of the horror genre is by humanising the genre’s traditional background stock characters: the villagers. During her apprenticeship under Dr. Bleak, one of the creatures Jack helps to resurrect is the inn keeper’s daughter, Alexis. During her second chance at life, the two grow close and form a romantic attachment to each other.

This is an important point in Jack’s character development, as it’s a type of love she hasn’t experienced before. One character does describe the relationship between the two girls as unnatural, but it isn’t made clear what their thought process is in context: instead of low-key homophobia (mixed with the usual worries around not being able to have children – an argument swiftly put down by Jack as she refers to her resurrection skills), they could also be referring to any type of love being unnatural in their eyes, or to the fact that technically Alexis is undead. This is the only overt negative comment directed at them – Jill quietly isn’t happy about the relationship either, but that’s mostly because she feels possessive of Jack’s attentions.

Jill’s unhappiness is an important counterpoint to the relationship between Jack and Alexis, because on top of the romantic upheaval their attachment also introduces Jack to Alexis’s village life. She meets the inn keeper and his wife, as well as other shop keepers and tradespeople as she accompanies Alexis on various errands. In contrast, Jill is denied this type of socialising during her education under the Master, who instead nurtures her jealous and possessive tendencies. It is this difference in upbringing that serves as the catalyst at the end of the tale, bringing the strands together.

This story really serves as a prequel to the first book in the Wayward Children series, which I will be re-reading to see how the relationship dynamic between the two sisters develops as they are forced to rely more on each other. As it stands, I would recommend Down Among The Sticks and Bones to anyone interested in the remixing of genre tropes and gender roles within the horror / SFF genre.

Content warnings: murder, death, blood, toxic relationship, emotional abuse (most of these are the result of the story featuring a vampire)