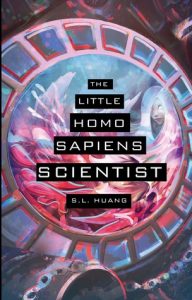 This is a fascinating novella. It’s a dark, reversed retelling of “The Little Mermaid,” from the point of view of a human scientist who acts in an anthropological capacity studying the atargati (definitely not “mermaids”). If “dark queer retelling of ‘The Little Mermaid'” didn’t already hook you, I don’t really know what else to say.

I really liked the author chose to not only have the atargati not have gender, but to also have a nonbinary human character (who uses hir/zie prounouns), so that it wasn’t presented as an alien concept:

We did try to describe binary genders to [the atargati] once. Of course Dr. Hansen jumped in and tried to expand the conversation to sex versus gender, and to explain intersex and genderqueer people, and I tried to stop hir because I thought that would be too confusing, but it turned out that part made more sense to them than what we tried to tell them about men and women.

This also had personal appeal to me because the main character falls in love with one of the atargati (of course), and really grapples with what this means for her identity as a lesbian, especially when she had to fight so hard to claim that space in the first place:

I lost my whole identity. I had to rebuild myself brick by brick and seal a shield around myself with the label “lesbian.” I’m attracted to women. I was born that way. I’ve always been that way. If that’s not true, then my whole life, every relationship, every broken tie—it was all a lie. …

I’ve never been attracted to a human man, and still can’t conceive of such a thing. But maybe… maybe I can’t be slotted into a box either. Maybe I don’t have a definition

Have I mentioned that this is a dark retelling? And that it is a retelling of Hans Christian Anderson’s original, and not the Disney version? I probably should have paid more attention to that, because I was disappointed by the ending. I was looking for a little more from the story: I think I was so intrigued by the world that I wanted to spend more time with it, even outside of this specific story. I wanted to know what happened after the story was over. I wanted to learn more about the atargati.

Still, this science fiction, queer, dark take on “The Little Mermaid” is compelling and memorable. You can easily finish it in one sitting, but it will stick with you long after that.