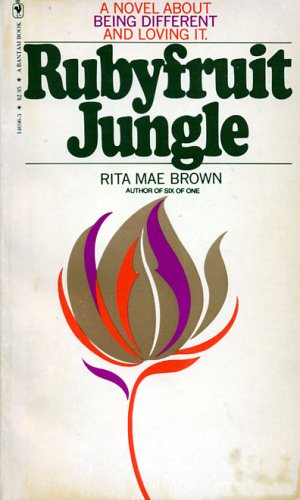 Well, I finally read Rubyfruit Jungle.  I’m not entirely sure what to think of it.

Is it well written, tightly plotted, compelling, and interesting?  Not really.  One meandering story runs into the next, sometimes without pause.  It is very picaresque in that sense; so perhaps Brown purposefully sacrificed plot in order to maintain that genre’s style.  I can’t say that it really works.  As a loose collection of adventurous anecdotes, I would have prefered the book to be better framed into chapters and sections, rather than literally going paragraph to paragraph, one story to the next.

On the other hand, is the book funny and entertaining, with a refreshingly frank protagonist and consistent narrative voice?  Absolutely. As both a child and an adult, Molly Bolt is always herself.  She knows what she wants and she knows how to outsmart everyone around her to get it.  Brown’s book is fairly revolutionary simply because Molly never really struggles with being queer– whatever unhappiness comes her way has more to do with society (personified as her parents, co-workers, classmates, etc.) and its inability to accept her as a normal.

In the last part of the book, Brown indulges in some fairly stilted dialogue between Molly and various characters, especially on the topics of heterosexual privilege, homophobia, and feminism.   It’s not only obvious and heavy-handed, it slows down an already poorly plotted book.  Most disappointing, though, is the dated, myopic judgement Molly expresses for other queer people.  The condemnation she has for butch/femme dynamics, while totally suited to a book written in early 1970s, is painful and disappointing.