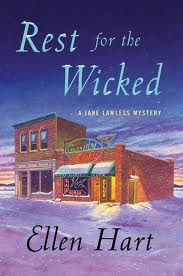 Ellen Hart’s latest Jane Lawless mystery (20th in the series) finds Jane on her first “official” investigation. After finally scoring her PI license and teaming up with A. J. Nolan, Jane gets to do things by the book this time. Unfortunately, her first client ends up dead before she meets him — Nolan’s nephew, DeAndre Moore, leaves a message on her voicemail, then is killed behind a gentleman’s club. Nolan doesn’t even know why DeAndre was in Minneapolis in the first place, but when he ends up in the hospital due to complications from his gunshot wound (acquired while protecting Jane), Jane has no choice but to try to discover DeAndre’s last movements and find out why someone would kill him. Soon DeAndre’s isn’t the only murder involved, and Jane will have to use all of her skills, old and new, to find out what is going on before the next body comes to light.

Jane has always been a favorite of mine since I was in college, and she has certainly grown through the years. While always embroiled in some sort of investigation, she was never a character that seemed too divorced from reality. Now, by giving her an official “license to snoop,” Hart can bring more investigative depth to an already well-rounded character. Jane’s love life is always dropped into each book in one way or another, and when she is (once again) between relationships, the gentleman’s club becomes a central point for a lot of interest in this story.

As important as Jane and her mysteries are to the books, the secondary plots around her business, family, or her friend Cordelia are always entertaining and well-written, if often a bit crazy (especially those featuring Cordelia). As long as Hart keeps creating these layered stories, I will be waiting for the next Jane Lawless book.