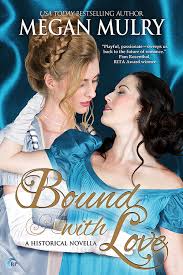 If you used to like Georgette Heyer and still love Jane Austen but are a little gayer than you used to be, perhaps it is time to check out Megan Mulry’s Regency Reimagined series. Bound with Love is a confection involving lurid pasts, long-kept secrets, and at its center, a smolderingly sensual relationship between Vanessa, an English aristocrat, and Nora, a Spanish-born portrait painter.

Although tragic events brought the women together, they’ve loved each other and raised a family together. Their world is perfect–at least, it’s perfect until the day a letter arrives that throws their knowledge of the past into uncertainty, and jeopardizes their future happiness.

The emphasis in this volume is on Vanessa and Nora, but it should be noted that this is the second book in a series. While it can easily be read as a stand-alone, this title is a novella, and the first and third titles (about Nora’s daughter’s relationships and Nora and Vanessa’s neighbors’ alliance with Vanessa’s daughter, respectively) are both novels. I’m not sure why this one didn’t get the full novel treatment, especially as it pulls together the whole group of characters.

One might speculate that this was not Mulry’s favorite grouping. I didn’t get that from the Nora/Vanessa scenes. They were fun. However, the ostensible plotline wrapped up rather suddenly, and the book simply–stopped. It does appear that the book is available only in Kindle form, and at a much lesser price than the other two volumes in Kindle form. And the other two books are also available in print. So…maybe this is an interstitial title? Written to appease those of us who might be more interested in the more “mature” lesbian couple, than in the carousing of the 20-somethings?