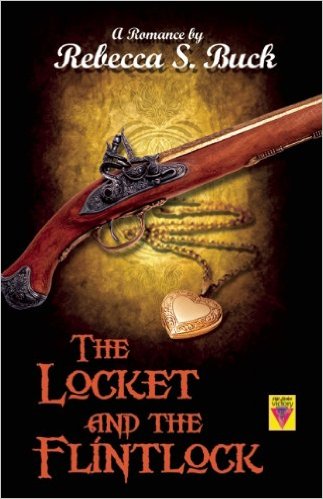 From Bold Strokes Books comes an unusual story of love amidst pre-Victorian England. The Locket and the Flintlock by Rebecca S. Buck starts in 1812 when Lucia Foxe, daughter of a wealthy British aristocrat, and her family are robbed by a band of thieves called Highwaymen. The thieves steal Lucia’s treasured locket and leave, but Lucia, bound and determined to get her locket back, secretly leaves home and pursues the outlaws. She soon meets their female leader, Len Hawkins, who on the surface seems vastly different from Lucia, but in reality shares a lot of common ground. The two, much to their surprise, become friends after a while, and later those feelings turn into undeniable love. But can gentlewoman Lucia and outlaw Len make a life together in a time when homosexuality was abhorred?

The Locket and the Flintlock  covers interesting topics, such as the social constraints women were faced with in the early 1800s, and how the poor barely had enough wages to live on and so many turned to a life of crime. The author did a good job highlighting these points, and the scenes where Len challenged Lucia on what society deemed “proper” rang true.

However, there were some things about the book that didn’t sit right with me. Lucia, never having been in a lesbian relationship before and unfamiliar with homosexuality, seemed to accept her feelings for Len too quickly. It felt to me that, a woman in Lucia’s time and society would have been more hesitant, afraid of being gay and done some serious soul-searching about it. But Lucia never really addressed this to herself, which I found surprising and unrealistic for the plotline.

At times, the two women’s stories were really absorbing and tense, but at others the book reiterated some of the same points which slowed the plot down. One unexpected twist felt a bit too convenient for Lucia and Len. And there were other moments in the novel that felt a little far-fetched for the characters, detracting from the story.

Though The Locket and the Flintlock wasn’t really my cup of tea, I applaud Rebecca S. Buck for all her research into the historical details of 1812 England and the last days of the highwaymen. The subject of a female highwayman isn’t touched on much, so it was refreshing to see that aspect of history acknowledged. Readers who love historical fiction, particularly in England, and women’s history should give The Locket and the Flintlock a try and see if it’s something they like.