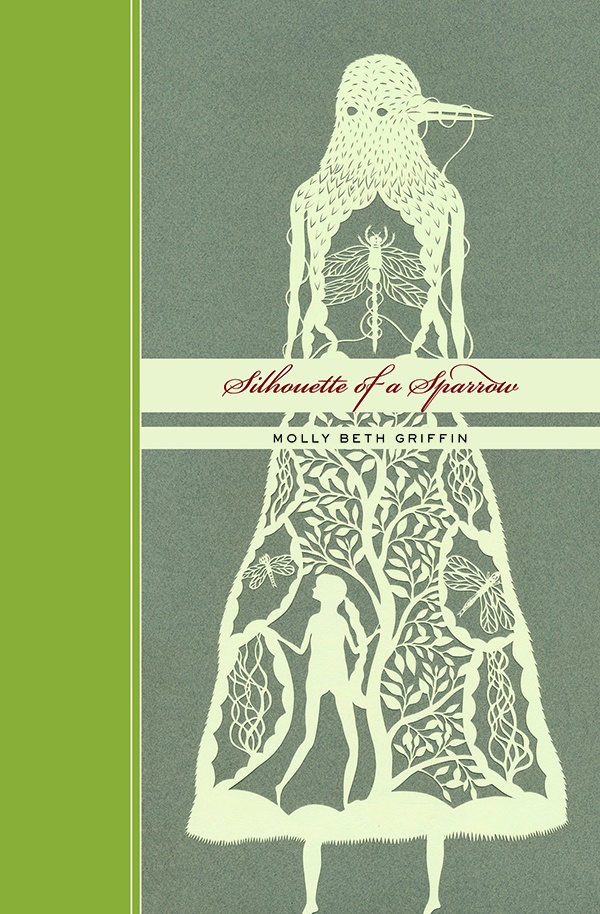 I think Molly Beth Griffin’s novel Silhouette of a Sparrow might just be the best lesbian young adult novel I’ve ever read.  I don’t say that lightly.  It has everything I could hope for: effortless yet beautiful writing, an authentic and lovable young heroine, a subtle and moving romance, an environmentalist sub-plot—honestly, what more could you ask for?  I think, though, that what I appreciated the most about this book is that, while the romance is cute and sexy and authentic and great, it wasn’t the focal point of the novel.   Rather, it’s the character development of the protagonist, Garnet, that Griffin is focused on throughout.  I would be the first to admit that the romance was my favourite part, but I am also really pleased to read a book about a young woman whose interests are diverse.  I think too often, especially in young adult books, even queer women characters continue to be defined by their romantic relationships.

Garnet is a strange and interesting mixture of artist and ornithologist (someone who studies birds).  She’s rebellious by 1920s standards, but Griffin resists the urge to make her so modern as to disturb the carefully constructed historical accuracy of the book, which deals thoughtfully and realistically with issues surrounding class, gender, race, and sexuality.  For example, Griffin writes about Garnet’s prejudice and preconceived notions about African-Americans at the same time that she explores the friendships that occur between working class white and black folks.  It would have been tempting to pretend a young middle-class white woman at that time wouldn’t have been raised in an explicitly racist environment, especially if you want modern readers to sympathize with her. Griffin, however, resists that temptation and I think this strategy is an honest acknowledgement of racism and a much braver approach than presenting a historically inaccurately rosy picture of racial harmony.

Okay, I have to talk about the romance a little bit, especially since it has a classic romantic ‘caught in the rain’ moment, which is my favourite:

“I looked over at Isabella—those perfect lips, that short hair starting to dry with little tufts sticking up at funny angles, those boyish clothes all rumpled and soaked.  I wanted to tell her secrets I hadn’t even told myself yet.”

Ah, that moment just before you kiss, when you know it’s about to happen, and you’re really excited but kind of terrified and it makes you feel like an entirely new person but wholly yourself at the same time?  Griffin does a great job of capturing their teenage romance and of painting Isabella as an enticing, rebellious, and sexy young woman, yet also a flawed, complex human being.

As great as Isabella is, though, it’s Garnet’s personal journey that is really the star of this novel.  Revelations such as this one border on the philosophical:

I looked closely at my edges, my boundaries, the slightly elongated lines that set me apart from lake and sky and island and bird and boat.  I looked closely, pretending that I knew nothing about the girl I saw, pretending that she was some beautiful creature whose borders contained something worth holding in—something unique and extraordinary, something worth saving.  I looked closely, the way I’d taught myself to look at birds, the way I’d learned to look at Isabella, and I saw myself.  Then those scissors were cutting after all, as I snipped out my own image.  I ignored the small ripples of the water and traced the lines that separated me from the world, and the lines that fit me into that world like the piece of a puzzle.

This passage actually reminded me in some strange way of Jeanette Winterson’s recent memoir; I might go as far as to say that Silhouette of a Sparrow is as inspiring, insightful, and beautifully written as Why Be Happy When You Could Be Normal?—albeit a fictional, young adult version.  From me, the praise can’t get much higher than that.  Please, go pick up this book!