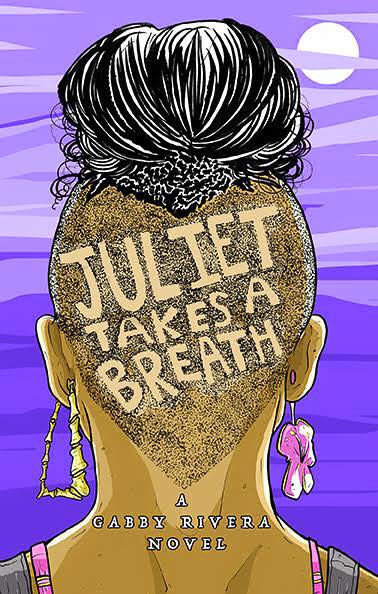 I can’t remember the last time I read a book in two days, but I have to admit that once I started reading Juliet Takes a Breath, I couldn’t put it down. I laughed, cried, raged, and wondered at Juliet’s antics and her naiveté, and fell more in love with this book every time I turned the page.

The novel’s protagonist is Juliet Milagros Palante, a 19-year-old Puerto Rican college student from the Bronx. She’s pretty sure she’s lesbian, and has been reading her feminist idol Harlowe Brisbane’s Raging Flower: Empowering Your Pussy by Empowering Your Mind, to help her learn more about feminism as well as her own sexual orientation. On a whim, Juliet writes Harlowe a letter and the author responds with an invitation to Portland to work as her intern for the summer.  After an awkward dinner where she comes out to her family, Juliet hops on a plane to Portland to try to figure it all out.

Harlowe is every white lesbian feminist hippie stereotype rolled into one. I have a feeling this was purposeful, since a good portion of the latter half of the novel is spent questioning Harlowe’s intentions and the one egregious act that sends Juliet away from Portland for a few days.  Still, Rivera’s characterization of Harlowe is hilarious as well as fodder for serious eye rolling. For example, when Juliet starts her period early, Harlowe tells her “My cycle is probably going to mentor yours.” Another gem:  After Juliet experiences a few intense days, Harlowe declares, “Not talking about a break-up can totally lead to a yeast infection.” There’s more of this, but again, I think the stereotyping is intentional; Rivera’s purpose is to question the universality of feminism and sisterhood, and Harlowe is the vessel through which she works through these issues in her novel.

My favorite character is probably Juliet’s cousin Ava, who calls Juliet out on her obtuseness after she flees to Miami to process what happened at Harlowe’s reading at the bookstore in Portland. My favorite line: “Girl, c’mon you could have realized that she was some hippie-ass, holier-than-thou white lady preaching her bullshit universal feminism to everyone.” Welp. I have to admit, I’d been waiting for someone to say this to Juliet the entire novel.  Regardless, Ava helps her to understand that queer Brown communities just might be the place where she can be her entire Puerto Rican, feminist, queer, curvy, self.   Ava takes Juliet to the Clipper Queerz party, a Black and Brown people only space, where it’s “less about there being ‘no white people’ and more of a night for us to breathe easier.”  Black and Brown folks are often accused of being exclusionary when we carve out spaces for ourselves, and Rivera does a great job of making it clear why these spaces are necessary for our mental, emotional, and yes, physical health.

I really loved this novel. However, there were a couple of times where I shook my head in disbelief as I was reading. For example, while Juliet’s naiveté is mostly endearing, there are places where it’s a bit over the top. How has she not heard of Chicana feminists Cherríe Moraga or Gloria Anzaldúa? Even her white feminist lesbian girlfriend Lainie seems to have a better grasp of Latina activists than Juliet, given her knowledge of Puerto Rican history and Lolita Lébron.  I was also a little troubled by the scene where she bleeds all over the bed at Harlowe’s house. Let me be clear, the bleeding wasn’t my issue, but who on earth tries to clean blood off of sheets using deodorant? Juliet is 19, not nine, so it seems unlikely that she wouldn’t know how to get a bloodstain out of her sheets.  There were a couple of other minor snafus as well, (the novel was preachy in places, and we don’t know that the novel is set in 2002 until halfway through), but these issues don’t detract much from the story.

All in all, this novel is a welcome addition to lesbian literature that focuses on Latina experiences. It’s a “fish out of water” type bildungsroman, with a Queer Brown twist. Does Juliet figure it all out in Portland? Is she able to reconcile all the parts of her intersectional identity? Can all women truly be sisters? I can’t promise that Juliet Takes a Breath offers tidy answers to any of these questions, but I can promise that you’ll have the time of your life finding out.