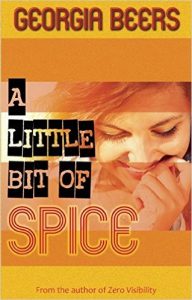 Kendall works at a microbrewery her brothers started and still lives on the property where she grew up in upstate New York. Part of her job marketing the family beer involves building relationships with clients and the line between her personal and professional lives is more than a little porous. She’s good at her job and she’s gearing up to get Old Red Barn Brewcrafters represented on the shelves of a regional supermarket chain, Hagan’s.

Andrea grew up in the same town and has worked hard since she was a teenager toward a single goal: managing her own Hagan’s store, ideally far away from New York winters. She’s posed to achieve her dream, but first she has to manage the beer division. The only problem is that she loathes beer and knows nothing about it.

Andrea and Kendall have run into each other socially and clashed on the volleyball court before she spots Kendall among the microbrewers vying for her attention. Even though the women have a history of nothing but mutual irritation, she gets Kendall to teach her about beer. When they start spending time together though, they find that underneath that annoyance is attraction. Yet each is a professional and neither wants to mess up her career with the conflict of interest a romance would entail. As they try to resist one another, their feelings only grow. Not long after Hagan’s has made its decision about beer and Andrea and Kendall are free to act on those feelings, Andrea’s offered her choice of stores to run–all of them out of state.

This was a pleasant romance and I really appreciated how, for the most part, Andrea and Kendall both acted like adults. They mostly made reasonable decisions and were responsible people. I loved that they both cared about their careers and work was an integral part of the story and significant for their characters. I liked both the main characters and their priorities made sense to me. Also, I learned some things about beer! I don’t like beer and see no future in which that changes, but if you like it or are interested in microbrewing that might be a highlight for you.

The biggest strength in this novel was the creation of meaningful, realistic obstacles to the character’s relationship. Andrea and Kendall respect each other’s values and ambitions, which pull them in different directions. Kendall’s work and all her meaningful relationships root her in place, while Andrea longs to move and her career benefits most if she does. This is a fantastic problem for a romance because it’s nuanced and doesn’t have an easy answer. Unfortunately, Beers didn’t explore this near the end as well as she set it up.

VAGUE SPOILERS! Despite the truly excellent groundwork for the final conflict in the story, it falls a bit flat near the end when one half of this couple isn’t honest about her feelings and self-sacrifices to do what she thinks is best for the other woman. Instead of a complex examination of how two people might balance their conflicting visions for their lives, we get a break up based on the all-too-common romance trope of lying in a misguided attempt to be noble. Then, of course, they are miserable apart and get back together and the real difficulties they face are resolved quite easily and without much emotional impact. I wish that both characters had said how they felt and the story had dived deeper into the clash between Andrea’s career and Kendall’s, between Andrea’s desire to move and Kendall’s deep ties to the area, and the difficulty of making big decisions about conflicts like this early in a relationship. END SPOILERS

Though the ending could have been richer, on the whole it was a solid romance and a fun read. If you like romance, this a good one for your reading list.