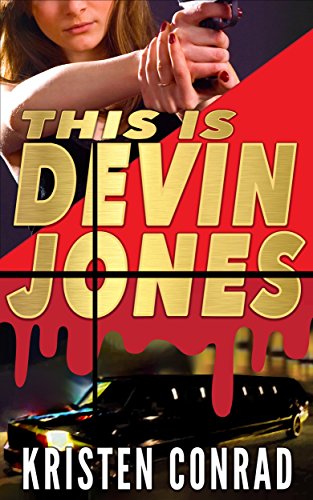 Oh, hey. Were you looking for a book about a lesbian badass MacGuyver-ing herself out of tight situations while taking out the bad guys and saving the world? Then you should read This is Devin Jones by Kristen Conrad.

Former model and actress turned Beverly Hills Police Detective Devin Jones is on the blind date from hell. Hoping to escape the emotional aftermath of a newly ended relationship, she agrees to a date to the Hollywood Screen Awards. While the date goes badly, it’s a good thing Jones is at the show. A madman interrupts the broadcast, taking a group of famous actors hostage. He starts killing them off one by one in front of the cameras while demanding hundreds of millions of dollars in ransom money from the horrified public. The only person left who can take him on? Devin Jones.

So, it turns out Devin Jones is the greatest cop that the LAPD has ever seen.

When the door opened — everything happened in a flash. As one guy came in, Devin grabbed his arm, bent it backwards, dislocating his shoulder and as he went down palmed his gun, flipped it into her hand and used it to shoot the other guy in the heart as he aimed his gun at her, his finger milliseconds from pulling the trigger. (Loc 1545)

Not only can she take on a whole league of bad guys all on her own, she can turn a disposable camera into a taser, even hot wire a car, all while wearing a Prada dress and Dolce & Gabbana heels. Also, if you haven’t figured it out yet, she is incredibly attractive. I’m not entirely sure what kind of cop school Devin went to, but she learned some incredible fighting and sleuthing skills.

The best part of this book is how enjoyable it is, especially given how far-fetched the plot gets. Conrad writes cinematically, the action leaping off the page. The situation is urgent, the death count growing, and Devin is without weapons or backup. But she is smart and savvy and uses everything around her to her advantage. The book is a lot of fun and it is particularly enjoyable to watch a woman competently and confidently kick ass and take names. There is even time amidst all the chaos for a little romance!

The characters don’t have a lot of depth, it’s true.  And while the story is thrilling, it is never very suspenseful. The mystery unravels pretty quickly. But this isn’t meant to be a particularly complex or deep story; it’s entertaining, exciting and delightfully over the top.