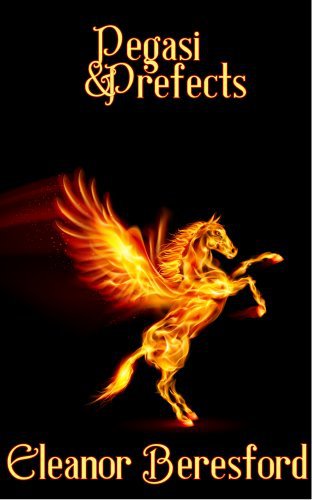 “I take my questions and shining little badges with me”

Keeping in line with my recent reviews, I read another short fantasy book. This time, I read Pegasi and Prefects which is the first in the Scholars and Sorcery series. I found it to be a somewhat good introduction but it focuses more on the main character, Charley rather than world building. At times it seemed slow but I quite enjoyed that. The book is only 138 pages so a quick read overall.

The story is about Charley, who attends Fernleigh Manor, a school for gifted people which are people that possess talents that are somewhat different from each other as no gift is the same. Charley has an affinity to communicate with fabled animals. Her family has a business in raising fabled beasts and in fact, Charley has a pegasus named Ember. She is friends with Esther and Cecily who are quite popular and so by default but not only, is Charley. They are in their last year of studies and Charley wants a quite year but her year is anything but that as she is made a senior prefect and a games captain- a sort of peer trainer for all the years and hockey teams.

Charley’s year is also rocked when two new girls transfer in their last year at the Manor. She has to share a study room with Diana, who many people are charmed by but not Charley. Moreover, She has to be friendly to Rosalind, a very shy girl but in the end this would not be a problem as Charley develops feelings for Rosalind after the two girls take care of an animal together since it turns out that they both share an affinity to fabled beasts.

Charley is what could be called a tomboy and we see some gender relations and how different people treat her because of this- namely Esther, Diana and her brothers. Charley learns not to fall into prejudice and also learns to be less selfish. This seems also a theme about her love life, where she assumes things about Rosalind and is jealous but at the same time wants to be selfless.

World building is slow and sometimes confusing but things eventually got clearer. We get to know more about different animals and about the history of the reality that the characters live in. When reading fantasy I tend to assume that it’s a different world and so I was surprised when things like cars or hockey got mentioned but when they were, it helped me understand and relate better.

Despite it’s slowness, I found it to be a calming book and it also kept me interested and as such, I read it very quickly. I recommend it to people that like fantasy books but that are looking for something different from the usual epic battle or action theme. It is also suitable for young audiences and more focused on Charley’s self-reflection.