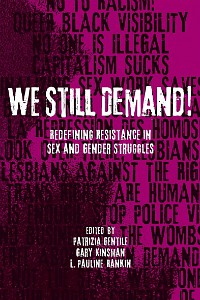 A weird thing about living in Canada is that you tend to know US history, laws, politics, etc more than you know your own. Reading We Still Demand! was a wake-up call that I actually know very little about Canadian queer history and activism, and that’s something I want to fix. Unfortunately, I had some issues with this particular text on the subject. For one thing, it is a very academic text, and it becomes dense to the point of being unreadable at several points. They do give a rough timeline of Canadian queer activism, but the focus is mostly on talking about radical vs neoliberal/homonormative/transnormative/homonationalist/human rights activism, and they seem to immediately dismiss out of hand anything that could be included in the latter category.

I will say, this is first time I’ve read anything and thought “I wish this was less radical.” Generally I am completely for radical activism. In this collection, though, it looks backwards at activism of the 70s and 80s and seems to neatly divide any work being done then as being either radical (worthwhile) or neoliberal (counterproductive). At times, this seems to require some odd mental gymnastics, such as defining 70s same-sex marriage activism as purely radical, but the same-sex marriage activism that followed as purely homonormative.

The essay that really got under my skin was about the beginning of trans activism in Canada (as an aside, this collection uses “trans*” “transman” and “transwoman,” even though it was published in 2017. Not sure why.) Instead of celebrating Raj and the work he did for trans representation, while also acknowledging the problems/limitations, this seems to drag him through the mud for not being radical enough, despite him publicly changing his stance on gay trans men (he originally posits trans men as being in opposition to butch women, so he paints all trans men as straight, but after backlash he became quite active in including gay trans men in his magazine, helping them to make connections with each other). It leaves a bad taste in my mouth to say that fighting for trans rights is homonormative or transnormative–that fighting for human rights isn’t worthwhile, because it doesn’t singlehandedly fix every problem.

Another essay acknowledges that Doug Wilson, who was fired as a teacher for being gay, lost his court case because sexual orientation wasn’t covered under the human Rights commission, but the text seems to congratulate him for walking away from teaching and entirely into activism, instead of acknowledging that fighting for rights has a place in queer activism. It also mentions a quotation from a queer rights activist that change happened because lobbying for rights laid the groundwork, but militancy of gays in streets brought results. Instead of recognizing this as two sides to the same fight, the author seems to conclude that the lobbying was pointless, or at least not very important.

There also seems to be some nostalgia about 70s and 80s activism as being back when All Queer Activism Was Radical. I would argue that the reason for that is because at the time, being out at all was radical. The liberal queers were still in the closet. Now, more people are able to participate in the discussion, because there is less danger in coming out, especially for cis white wealthy privileged gay men, so it’s not surprising that the conversation has changed. I also disagree with this strict division between radical and neoliberal activism because there is so much grey area: is fighting to repeal anti-queer laws radical, but not fighting for human rights that would prevent those laws?

Homonormativity/transnormativity also assumes that queer people can be easily absorbed by the system–that same-sex marriage did not change the institution of marriage at all. Can’t there be some space between revolution and assimilation? Isn’t it possible that same-sex marriage complicates the institution of marriage even as it reinforces other aspects? I agree that we should be fighting for big, radical change, for dismantling the system, but I also think there is merit to people trying to change it from within in the meantime. This collection seems to suggests that anything less that revolution is misguided. It made me think of the Trevor Project, which seems calls skyrocket after things like trans people being barred from the military–policy changes have real immediate effects for some people. Same-sex marriage may not have ended queer oppression, but it did change people’s lives: for the people able to see their partner in the hospital, for people able to bring their partner into the country, for kids who saw the world as a little less hostile to their existence.

All of this is not to say that I disagree with centring the most marginalized members of our community. One of the later essays describes how gay activism dropped issues of class and poverty after gay community was labelled as the “pink market” (white, middle class, cis, etc), and I do see how this plays out in ignoring the most vulnerable people in our community. I do believe that we should be prioritizing the most pressing, life-threatening issues the queer community faces, even if it’s not politically expedient (such as acknowledging that the issues of safety in sex work and the rate of murders of trans women are intertwined). I think we should be fighting on all fronts, though, and not promoting further fracturing inside the community by sorting people into Good Queer Activists and Bad Normative Activists.

I feel a little silly going into such depth in my issues with a book that very few people have even heard of, but it got me thinking! And honestly, that’s a good thing in itself. I do like exploring academic texts every once in a while as a way to stretch and test my own thinking on a topic. A few other notes that I have on this one: the introduction acknowledges that there is no indigenous perspective offered in the collection, and says that it’s a huge gap, but… I don’t feel like that’s good enough. It seems strange to me to say that an indigenous viewpoint is crucial, and then go ahead and publish your collection without one. Isn’t that your job to find that contributor?

I liked the later chapters much more than the first section. The “passing” chapter introduces the difficulty of “reading” people in the past as either trans men or butch women, and the problems that these categories suggest, as well as the ones present in the language of “passing.” I was also really interested in the chapter about dyke s/m in Canada, and how the “lesbian sex wars” debate on BDSM didn’t really exist in Canada (unlike the US), possibly because Canadian censorship of lesbian SM material could have allowed for solidarity in lesbian communities in fighting censorship. The later section also seems to be less concerned with the division between neoliberal and radical activism–for instance, the sex work chapter has a very different attitude towards police coalition than earlier chapters did.

I definitely want to explore this topic further. I want to know more about both the past and present queer activism in my own country, without just swapping in the US queer history that I know and assuming that it’s the same. Unfortunately, I don’t think I’ll be seeking out these particular editors in the next books on the topic I pick up, because I didn’t think that their lens added to the topic.