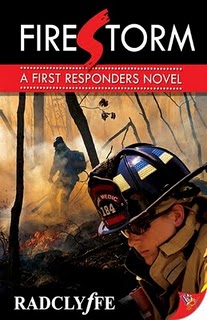 Mallory James is a cool-headed firefighter paramedic (aptly nicknamed Ice) who leads a band of smokejumpers six months out of the year in Montana. Training rookies in thirty days takes all her time and attention, but when Jac Russo shows up unexpectedly to fill a slot, Mallory finds herself fighting an attraction she hasn’t felt in a long time, which makes Jac trouble with a capital T. Jac has the skills to be on the team and is running from both the tabloids and her conservative father, who is on the campaign trail and courting followers. Mallory does her best to put Jac in her place, but Jac isn’t afraid to pursue the woman, or the work, she wants. The relationship heats up as a subtle cat and mouse game between the two women culminates in passion that cannot be denied. However, when Jac is called back to family duty, will Mallory let her go or fight for the one who finally melted Ice?

I liked this story. I do think it took a long time for the characters to come together, even with the obvious attraction between the two. Not that it wasn’t completely unbelieveable: workplace relationships, especially between supervisor and rookie, can be frowned upon. The emotional angst of the two were palpable: Jac has her conservative father and his Presidental run, Mallory has her loss of two smoke jumpers the summer before to increase her concerns about leading the group. The self-doubt would be enough for anyone to question their feelings about everything else in their lives. The whole twist of how Jac ended up in Montana was a bit convoluted, even for those involved in politics, but made the dramatic tension palpable through the end. Radclyffe has a way with words. Her scenes are vivid, both in their visual set up of scenes and the sensual and emotional tension between Jac and Mallory. Having the taunting instigator named Hooker made me chuckle through most of the book, but the secondary characters are solid, especially Sarah.

Radclyffe bring another hot lesbian romance for her readers in Firestorm.

Note: This electronic galley was provided by the publisher through NetGalley.