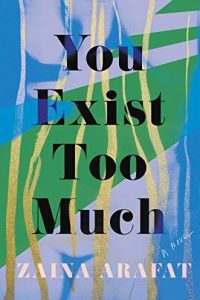 Zaina Arafat’s You Exist Too Much follows an unnamed narrator as she struggles with her love addiction. The protagonist moves from one toxic relationship to another, and when she finds something that could be solid, she self-sabotages. Told through a series of vignettes, the novel spins the tale of an imperfect and complicated human.

The main character is not likable. She’s messy and self-destructive. Her infidelity could read as playing into the stereotype that bisexual people are cheaters. But Arafat does an adept job in showcasing that she’s unfaithful because that’s part of her personality overall, not a result of her bisexuality.

As the book unravels, we learn about the protagonist’s past and childhood, including her mother’s history. This all comes together to create a whole picture of why she engages in such toxic behavior and relationships. It never necessarily makes her likable, but it does make you understand her better as a person.

The protagonist has a strained relationship with her mother, who was emotionally and physically abusive to her as a child. It’s this lack of maternal warmth and love that leads her to act out as she craves that unconditional love her mother never gave her.

She enrolls in a rehabilitation program for love addiction, but she’s skeptical in the beginning. She feels her issues aren’t comparable to problems like drug, alcohol, or sex addiction. But as she progresses through the program, she finds a sense of camaraderie with her peers and even confronts some of her emotional trauma.

It’s interesting that the protagonist explicitly states her physical attraction to men and women, but asserts she only sees herself romantically happy with a woman. It brings up the idea of a broader spectrum, with bisexuality combined with homoromantic orientation. And none of it is ever easy. She encounters a lot of biphobia, especially from her mother, who thinks she’s just a closeted lesbian.

I can’t speak to it as it’s not an experience I’m familiar with, but I did want to mention a content/trigger warning in the novel for eating disorders. The main character often discusses her anorexia as part of her issues with seeking control in place of love. It’s a subject that is mentioned casually throughout the novel, not playing a central role but clearly having an influence on her character.

Once she leaves the clinic, she falls back into old habits, adding to her unlikability. But by the very end of the novel, she comes to have a sense of closure with her relationship with her mother. And that alone feels like she’s grown so much from where she started, making it a satisfactory ending. 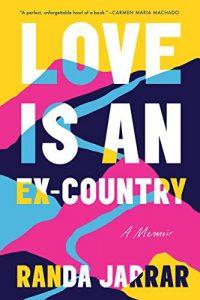