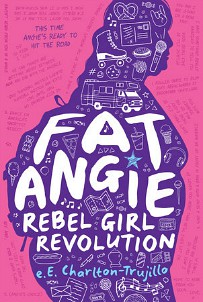 When I finished Fat Angie, I felt a bit conflicted about it. I liked the character and thought the language use was interesting, but it was so dark that I felt like I couldn’t find even a glimmer of hope. Despite the many strong elements of the novel–who can resist queer girls kissing to the theme song of Buffy the Vampire Slayer?–I finished it feeling exhausted by the emotional weight of Angie’s life. It felt like there was no area of her life the was spared from cruelty.

So when I picked up the sequel, I was wary. I wanted more from Angie’s story, but I couldn’t handle another storyline that felt so unrelentingly hopeless. I didn’t need her to have a fairy tale ending, but I wanted there to be some element of hope in her story. Luckily, Rebel Girl Revolution delivered that. Angie begins the book much the same as she started the last one. Her next year in high school is not looking much better than her last. Her main tormentor has started dating her best friend, and Angie is not buying her sudden change of character. She is seeing a better therapist, thankfully, and her relationship with her brother is slightly improved, but her mother is still The Worst, and Angie is still lonely and deeply grieving. When she defends herself from a football player attacking her, things go from bad to worse. We do see some of the progress that Angie has made, though, because instead of channeling that into self-loathing, she spontaneously reaches out to an estranged childhood friend, Jamboree, and they go on the road trip that Angie’s sister wanted to take her on.

This was just wanted I wanted from Angie’s story. It’s still difficult, and she is still in a lot of pain. She’s also angry, and she’s questioning a lot about her life, including the relationships she has. Everything is tangled, complicated, and so raw–but it feels worth it. Angie hasn’t given up. She’s gone on trip this with Jamboree, Zeke, and (oops) Darius, and all of them have multilayered relationships with each other. They fight, they mess up, they threaten to abandon each other on the side of the highway, and they have dance parties together.

Some of my favourite things to read about are complex relationships, whether romantic, familial, or friendships. I love stories that can communicate the depth of conflicting emotions you have about a person: the kind of people in your life who you can be the most angry at, but who are your most treasured connections. How toxic relationships can feel, at times, as if they’re the best things in your life, and how that can be the most dangerous part. Or the relationships that can be so much work, but that are nourishing, sustaining. Rebel Girl Revolution wrestles with the complicated connections that every character has with each other, in a way that feels very real.

Not only does Angie develop more connections, she also pushes herself to grow in the ways that matter to her. This trip is partly following her sister’s lead, but it’s also a chance for her to take control of who she wants to be. She throws herself, sometimes with intense fear, into new situations. Sometimes she gets spat back out. But sometimes, she shines. It suggests that there is a future for her, and that there are more options available to her than she imagined.

This isn’t a Disney movie ending. It’s not Angie all better, popular, or becoming prom queen. But it’s her making progress. It’s Angie feeling as if, sometimes, she’s doing okay. If you’re looking for YA that doesn’t shrink away from despair, pick up Fat Angie, for sure. But even if that seems too much for you, I definitely think this is worth the read (and I feel like it could work as a standalone?) I hope to see more from Angie in the future.

“There’s more to you than how you look, you’re more than a package”

Fat Angie is a book that I had been meaning to read for a while because it seemed like a complex and intersectional queer read. Spoiler: it is.

Fat Angie is about Angie, a rerunning freshman in Ohio who has a lot to deal with but never seems to give up. She takes on her sister’s advice and tries to ‘follow through’. Her sister, who, after a stint as a great basketball player, joins the army and is taken hostage. Angie still has hope that her sister is alive and fights everyone that tries to mud sling her sister.

Angie is bullied but she does stand up for herself sometimes. She wants to please her mother who sends both her and her brother Wang to therapy (and is dating their therapist) but her mother is never pleased. Be warned that her behavior could be triggering to some. Despite this, I find the characters in this book to be multidimensional. The bully may have reasons, the perfect popular star may not be perfect, the main character herself makes mistakes. Most characters are hurting and they cope differently.

Then there’s KC Romance, the new girl who falls for Angie and Angie falls for who sees Angie as Angie, without the fat. KC is a complex character, who is seen as ‘alternative’ but is popular yet she has a somewhat dark past but whose mother probably is the only mentioned parent that’s a parent role model.

Angie copes with her sister’s ‘MIA’ status with two, seemingly paradoxical things: binge eating and sport (first basketball in the steps of her sister and then another sport). At the beginning of the year, it is mentioned that Angie tried to commit suicide and this became a public event. Yet, she doesn’t give up. She doesn’t fit in, she’s awkward but she takes steps to move on despite being stuck somewhat in the past, when her sister was still with them.

Angie’s and KC’s relationship is deep, connecting, sweet with a cup of drama and misunderstandings and awkwardness thrown in. It’s a mature, teenage relationship that is not perfect but supporting the individuals within it.

Be warned that this book contains some triggers: suicide attempt, self-harm, body issues, mentions of death and torture, bad parenting and bullying. Sometimes, especially with Angie’s mother and her therapist, the reader is left bubbling with anger. At the end, I think that although not justified, we see also different sides to the characters that we do not like. The character development in this book was subtle, but well executed.

I would recommend this book, which I rated as five stars, to people that want to read a queer book where the main focus isn’t the relationship (it’s still a big part though).

I listened to this book as an audiobook- my first one- thanks to the Sync Audiobooks Summer program which means that this audiobook is free to download until today (21st July 2016)! I will try to read the book in the future to compare my experience but I think that the narration was done quite well and helped to immerse me in my experience (I coloured while I listened).