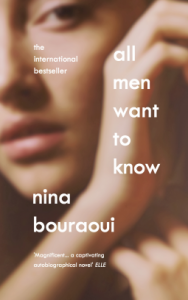 In the first chapter of her auto-fictional novel All Men Want to Know, Nina Bouraoui (translated from French by Aneesa Abbas Higgins) writes: “I want to know who I am, what I am made of, what I can hope for; I trace the thread of my past back as far as it will take me, making my way through the mysteries that haunt me, hoping to unravel them.”

This is just what the book sets out to do, exploring the narrator’s adult sense of identity–lesbian, writer, French, Algerian–through her past. Born to a French mother and an Algerian father, Bouraoui lived in Algiers until the age of fourteen, when her family relocated to France. Through this fictionalised narrative, Bouraoui ‘unravels’ her personal history, from a sun-baked childhood idyll in an Algeria threatened by the looming civil war of the 90s, to her search for connection as an 18-year-old in the lesbian nightlife of Paris, to her mother’s own life and experiences of sexual assault.

The story is told through beautiful vignette-like chapters that flicker between time periods and locations, mixing past and present, Paris and Algiers. It’s an experimental form that risks becoming frustrating, but I found the short chapters page-turningly compelling. The lack of fixed time and location represents Bouraoui’s own feelings of belonging between places: “I can’t choose one country, one nationality, over the other, I’d feel I was betraying either my mother or my father.”

In the Algerian chapters, headed as ‘Remembering’, Bouraoui writes vividly of desert holidays with her mother and sister alongside the horror of political unrest and violence. Roadblocks, harassment, and murders intertwine with family anecdotes and capers with her childhood best friend Ali.

As an 18-year-old in Paris, Bouraoui begins frequenting a women-only nightclub, looking for love but too terrified to act upon her desires. In this intimately anonymous setting, she feels part of the gay community (“I like these two words, they don’t so much belong to me as own me”) but experiences disconnection from her new lesbian social circle (“The women I spend time with are my rivals, women I go out with, not my friends”). Away from the club scene, she also begins to write. These chapters–headed ‘Becoming’–are reminiscent of the Parisian chapters of The Well of Loneliness as well as the works of Qiu Miaojin in their haunting sense of alienation.

The final narrative strand offers an account of Bouraoui’s mother’s youth in a war-torn France and the barriers surrounding her cross-cultural marriage. These ‘Knowing’ chapters mix family oral history with omniscience – how much would the narrator have been told and how much has been imagined?

All Men Want to Know is an evocative, heartfelt novel that explores psychological questions of self, belonging and knowing. While it covers distressing topics, it’s ultimately a beautiful and hopeful account of coming of age while straddling opposing identities.