When you open up a book and it includes a map, family tree, glossary, and a pronunciation guide, you know you’re getting into something big. Hild is the first book in a (3 part?) series that explores the life of St Hilda of Whitby. Hild starts with her childhood and her ascent into being a king’s seer. I don’t read a lot of historical fiction, so I was pretty quickly overwhelmed by the scope of this book. Little did I know that I would soon wish that the family tree included was about three times as large. The story deals with a lot of political intrigue, and depends on keeping track of who is related to whom, and how royalty is passed through family lines in medieval Britain. Personally, I’m already terrible with names, so throwing in a lot of names that I’ve never heard before made it even harder for me to try to puzzle out what was happening. Add in vocabulary that I wasn’t familiar with (again, I ended up wishing more was included in the glossary), and I’ll admit that sometimes I just gave up on really understanding where the plot was heading. Take this paragraph, for example:

As the weather improved, messages began to come in from all over the isle. Two, from Rheged and from Alt Clut, said the same thing: Eochaid Buide of the Dal Riata was sending an army to aid the Cenel Cruithen against Flachnae mac Demmain of the Dal Fiatach, and chief among the Dal Riatan war band were Idings–though the man from Rheged thought two, Oswald and Osric, called the Burnt, while the messenger from Alt Clut thought three, Oswald, Osric the Burnt, and the young Osbald.

I’ll admit that that is a bit of an exceptional example, but it does give you an idea. Subsequently, I found getting through Hild to be a bit of a slog at times. Surprisingly, though, I never wanted to put it aside for something else. Partly it was because I’d heard such good things about it, but also because the story still had so much to offer, even when I wasn’t sure who had just been unseated and what that meant for political climate. (The political aspect of the novel resembles an elaborate chess game.) For one thing, Hild is a fascinating character. Her mother had a vision while she was pregnant with her that Hild would grow up to be the “light of the world”. Her mother raises her to become this, training her on how to be a seer–which mostly involves being very, very observant. Hild grows up to be keenly aware of everything happening around her, using this knowledge to make seemingly uncanny predictions of what will happen next. Between her and her mother, they demonstrate how women are able to find ways to exercise power even when society is stacked heavily against them, and other female characters show this in more subtle ways. Even the fact that Hild constantly references this political landscape as a fabric being woven shows this: the mix of the traditionally masculine political world contrasted with “women’s work”.

The story also shows the changing social climate of the time, specifically of what it looked like when Christianity was just beginning to be widely recognized and taking over older systems of belief. Nature also remains a constant theme in the novel, really immersing you in the landscape. Griffith is a fantastic author, and manages to balance many different aspects of this story effortlessly, often subtly alluding to earlier themes that I hadn’t even consciously noticed until they were perfectly tied in again. Hild is equal parts an expansive story about the rise and fall of kingdoms, and a coming of age story.

Then, of course, we have the reason this review is at the Lesbrary: Hild’s bisexuality.

The fact that Hild is bisexual (though, of course, she doesn’t use that vocabulary) is a nonissue in her life. In fact, it’s referenced several times that it’s not unusual for gemaecce (female friend pairings) to have sex with each other, but it’s discouraged simply because if the sexual relationship sours it creates tension in the friendship. Hild doesn’t end up with her gemaecce, but instead with her slave, which definitely comes with a lot of power dynamics. Gwaldus, her slave, is the one who initiates the relationship and who dictates the terms, but that doesn’t negate the fact that she is owned by Hild. Sex is treated differently in the story, however: it’s handled as a physical need, as Gwaldus soothing Hild, not unlike brushing her hair or any of the other services she provides. Still, Hild eventually frees Gwaldus and ends the relationship, implicitly acknowledging that she was at fault. It’s definitely not a focus of the story, and it only comes up near the end of the book, but if you’re looking for a book that “just happens” to have a queer main character, this definitely fits the description.

Despite being a little lost a lot of the time while reading it, I enjoyed Hild and will definitely be continuing with the series. Although this was an ambitious and satisfying book, I can see how it could also be setting up for the main story in the next volumes, so I look forward to that. I would recommend this one, especially if you’re a fan of historical fiction (or epic fantasy, because several reviews compare it to “Game of Thrones without the dragons.” 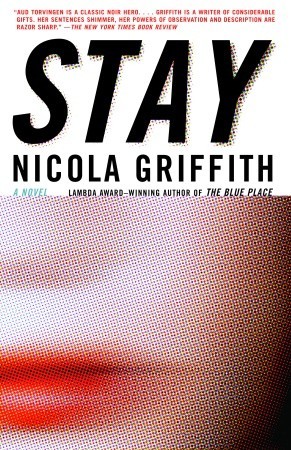 I really loved the first Aud Torvingen book. And was pretty disappointed in the sequels.   This review contains a lot of plot spoilers, so consider yourself warned.

Stay (book #2)  started off strong, and because I was so committed to the first book, I was as lost in Aud’s grief as she herself was.  But then Griffith has Tammy show up and I find myself caring about the book less and less.   I don’t really like Tammy and I don’t think the reader is supposed to — she isn’t a likeable character.  I followed faithfully while Aud rescues her and am even thrilled during the explosive action scenes. Griffith can write some page-turning stuff!  As the romance goes along, I find myself checking out.  It’s just not there.  And without the romantic drive that the first book had, the mystery plot thins out, the noir becomes slightly ridiculous.  By the time we get to poor, abused Luz, it’s too far-fetched for me– and that it really saying something for a noir crime thriller starring a semi-psychopathic/superhero Norwegian ex-cop.

In Always, the 3rd and final book, each chapter skips between the recent past in Atlanta and the present Aud in Seattle.  Griffith’s hints about ominous doings in the ATL are heavy handed. With each Atlanta chapter I feel more and more like I am attending a lecture on violence against women.  It’s expository, boring, and also terribly obvious.  Somebody in the self-defense class did something terrible with Aud’s teachings, and Aud is carrying the guilt for it.  By the third or fourth chapter, I’m certain who it is and what she did, and I can’t sustain an interest in the plot any further.

Aside from seeing her mother, I never quite buy what the hell Aud is doing in Seattle.  If you are a trained martial artist, and know so much about violence against women, then maybe you too should have seen the incredibly obvious plot points I saw in Atlanta?  And then Aud is conveniently poisoned, and it’s off on the mystery train.  Kick, Aud’s new love interest, is a shadow of a character and the physical attraction Aud feels isn’t enough to sell me on the relationship.

About half way through, I skim the end, confirm the who did what in Atlanta, and put the book down for good. 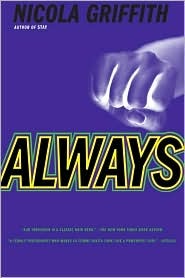 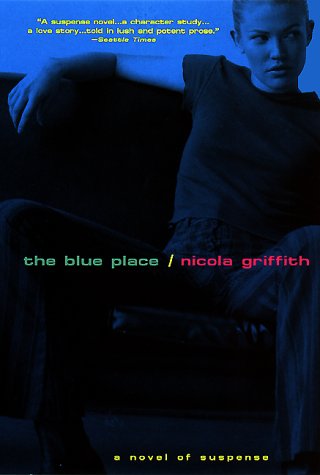 Griffith uses  descriptive language much more lush and lyrical than anything Ellroy writes, thatI found evocative and compelling.   I also loved the way Griffith plays with her story– violence is portrayed as both shockingly out of place and terribly mundane/realistic. Aud, the protagonist, is so horribly emotionally vulnerable but physically, totally impenetrable or unbeatable.

The only downside to the book is how quickly and completely Aud falls in love with Julia. Its simply too quick and too out-of-character for someone who is portrayed as being just this side of a psychotic criminal.  The “I just met you but I’m completely in love” thing is an obvious plot device and boring to read.  I felt a little cheated to spend two-thirds of the novel sympathizes with a damaged and difficult character only to find myself headed towards an obvious Doomed Lovers are Doomed ending.

However, even if I finished the book slightly disappointed, the character of Aud has stayed with me since reading it. I crave knowing more about her, am semi-desperate to continue reading the series, and found myself unable to read anything else for thinking about Aud. Butch, mysterious, violent, Norwegian– I kind of love her.

“Song of Bullfrogs, Cry of Geese” is a science-fiction short story set in a world in which a disease – or symptoms as it is named – is weakening the human race, slowly making it die. The story particularly focus on one immunologist, Molly. She lives on her own, recluse, near Atlanta. She is given food and supplies regularly by the city in hope that she would change her mind and come live with them and not outside. They want her because they believe she can find a cure, or at least try to. But she doesn’t want to.

The reason for it is simple: Helen died in the place Molly lives in and it is the last link to her she has. The story might be set in a science-fiction setting but it is very much a story about loss and grief. Molly is staying because of all the memories of Helen, because of all that the place reminds her of.

In spite of being alone, the place Molly lives in is full of life and buzzing with animal activity. It feels a little like she is not that alone until she realizes that the animals don’t care about her. SPOILERS She is just another animal for them and she doesn’t belong in this place in which she can’t survive on her own, in which Helen is no more. It is not until she comes to realize that she has been living a lie, staying here because of her grief that she is able to heal and understand that no matter what her love one will not come back and that she can do better with her life than wait and watch. END OF SPOILERS

Like I mentioned earlier this short story is very much about grief and loss and the slow process of healing from it. It might be science-fiction but the genre is barely visible, simply being in the background. The story is well written and it all flows easily under the reader’s eyes. I won’t remember it as exceptional and will probably never reread it, but I enjoyed it while reading and loved the images Nicola Griffith used in it, it made me curious about her other works.

If you want to read the story, you can find it here at nicolagriffith.com.