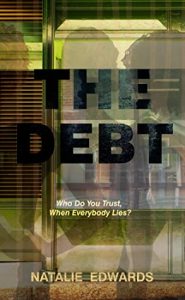 El is a con artist. She began this vocation as a 12 year old orphan, being raised by her reluctant aunt. El was smart, bored, and angry when a library book of cons led her to being taken on as an apprentice by Rose. Now, she’s established her own reputation as a woman who can get things done, and she’s able to live out her life in a secluded house in the countryside, just taking the jobs that interest her. When Rose asks her for a favour, she has no idea that this chain of events will lead her to joining a team of women bent on revenge.

The Debt is a crime thriller set in England in the late 1990s: part heist story, part revenge plot. At first, I wasn’t quite sure what was happening. We’re thrown into El’s world, where nothing can be taken at face value. It’s told mostly from her perspective, but we also get excepts from newspapers and magazine articles, and some flashbacks–including the first chapter. Because this is a story about con artists, you’re never sure what’s real, and everyone has a secret. Reading the first chapter, I thought it would be a mystery solved by con artists. Soon, it felt more like a heist story, with a team of very different women joining together to take down a common foe. As I kept reading, I realized that this was darker than that would suggest: it’s fundamentally a revenge story against someone who seems to have no bounds to his cruelty. While a heist story is usually about getting away with a prize, none of these women will be able to regain the people that were taken from them. They can only hope to stop it from happening again, and enact some blunt force justice.

Even before I had acclimatized to the tone and focus of the story, I immediately liked El. She is self-assured and skilled at what she does. She seems to always have things under control, which makes it all the more interesting when she is forced to deviate from her plans. I also found it interesting that she isn’t motivated by money: even when she was a child, she had spending money, and we meet her when she’s already well-established. She does cons because she’s good at them, and because she wants to. Unfortunately, this isn’t a profession that easily meshes with having a relationship. We learn that she’s had a string of short-term girlfriends, but the relationships all ended when they began asking questions about her work. There isn’t any romantic subplot here, but we do see multiple queer characters, and get some insight to what that meant at different time periods in the UK.

The whole appeal to me of a heist story is the ragtag crew of characters. There’s something very satisfying about a group of talented, motivated women teaming up to bring down a rich, misogynistic, violent man. Although we don’t spend a lot of time with each character–the plot takes up most of the page time–we do get enough to have a sense of them all as distinct personalities, and I wanted to spend more time with them. Of course, that would have slowed down the pacing some, so I’m satisfied with what we got, but Edwards managed to make each of their personalities intriguing enough that I wanted to get to know them more. They all have their own reasons for getting involved in this, and as their plan comes together, we begin to see how their stories intersect.

One character I did not want to see more of was Marchant. He is the villain of the piece, and almost over-the-top in his cruelty.

Marchant, despite his corporate successes, had one, deep-seated ambition that remained thus far unfulfilled: he wanted to get into office. Not buy his way to a peerage or sit on the non-exec board of a policy institute, but actually get elected–to have people want to vote for him. It wasn’t even really about power, Rose had said–he had more than enough of that already. It was about ego. He had a narcissist’s appetite for veneration.

Marchant is a powerful figure, a businessman whose success comes down to being given loans by family early on. He has “connections” that make him untouchable, despite the long list of despicable acts in this past. This power isn’t enough, however: he’s egotistical enough to run for office… (This is England, by the way.) It’s not hard to get behind the women’s plan to take him down. Because each of these characters has a connection to him and has personal reasons for wanting him to fall, it lends the revenge plot a lot of weight–especially considering that he has no qualms at having any potential threats “taken care of.”

The dark tone of this story comes with some content warnings you should be aware of. There is violence, murder, and gore, including familicide as well as child abuse. There’s also mention of hatred of sex workers, but this is pushed back on by the text. There was also offhand mention of a schizophrenic person murdering someone (equating being schizophrenic with violence), and fatphobia in the narration of the story, which felt like rare missteps in this novel. While I’m discussing flaws, I did have one questions about the ending: [spoiler, highlight to read] Why weren’t the women all tied up when El walked in? Or dead? Didn’t Marchant only need Rose alive? It also seemed too risky that the video would be sent to the news station before he showed up. [end spoilers]

Overall, I was pleasantly surprised by The Debt. I don’t read a lot of crime novels, so I wasn’t sure how the reading experience would go. I ended up being invested in the characters and discovering their backstories, and I couldn’t help but root for Marchant being taken down. [spoiler, highlight to read] I was also happy to see that it ends up being a heist story of kinds after all! [end spoilers] This is also possibly the most well-edited self-published book I’ve ever read–it wasn’t a surprise, then, to find out that Natalie Edwards is (along with being a “cultural researcher with a long-standing interest in cons and con artists”) a former copywriter.

If any part of “all-women heist team, con artists, and a revenge story against a wealthy misogynist” interests you, definitely pick up The Debt by Natalie Edwards!