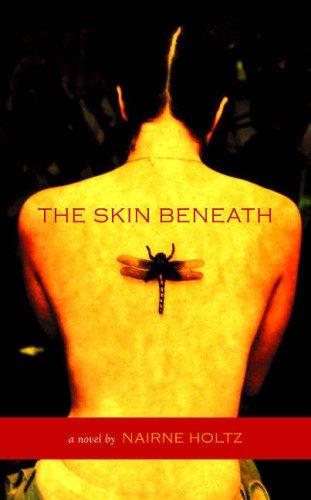 I cannot adequately explain the joy, the incredible sense of pleasure, I derived from reading this book. Even as the book’s plot unraveled a bit at the end, I enjoyed every moment of reading Nairne Holtz’s Skin Beneath. The first paragraph:

Sam unlocks the mailbox in the lobby of her building, takes out a single envelope, opens the back flap to discover a postcard inside. She reads the words on the postcard: “Your sister died while investigating a political conspiracy. Coincidence? How often do women kill themselves with a gun? Think about it.”

What an opening, right? First, the sentence is not a fluke– the entire novel occurs in third person, present tense. Which is just… amazing. In a lesser writer’s hands, it could have come across as gimmicky, or even intrusive. It was a little mesmerizing, instead, to experience the events of a book at the same time as the protagonist. And secondly, the subject matter! A dead sister! A conspiracy! Holtz not only writes well, she also imagines a great plot.

Interestingly, this is a difficult book to sum up because it’s only a mystery on the surface. Five years after her sister’s death by overdose, Sam receives a post card claiming Chloe’s death was not an accident at all, but murder. Still struggling with grief and guilt, Sam decides to trace the mystery of her sister’s last months by moving to Montreal and trying to figure out who Chloe knew, where she worked, what she did, etc., before dying in the Chelsea Hotel in New York. In Montreal, she becomes entangled with Omar and Romey, Chloe’s ex-boyfriend and ex-roommate– both of whom appear to have secrets of their own.

The mystery of Chole’s death is the impetus for Sam to change her life — as she finds out more and more about the secrets of her sister’s life, she also has to deal with her own secrets, her own hidden truths. She also falls hard for Romey, even as she doesn’t quite trust her new girlfriend, or Romey’s relationship to Omar. It’s an incredible journey to follow, and I love the way new clues about Chloe reveal new sides to Sam and Romey. However, Holtz doesn’t maintain the momentum, and the end felt anti-climatic. It all kind of collapses in on itself, as some of the conspiracy revelations get a bit extraordinary in the last half of the book.

All in all, this was a great read that I highly recommend and I will definitely be picking up more books by Holtz. 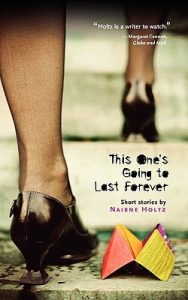 I wasn’t sure how to sum up This One’s Going to Last Forever, so here’s the blurb:

This One’s Going to Last Forever reflects both the naïve optimism of those who have yet to learn about love — and the cynicism of those who feel that by now they should know better.

Clara, a university student working at the McGill Daily, discovers that in love and politics, commitment is often more imagined than real. Kelly and Sonya share a bond that has less to do with love than with their dependence on each other and a succession of friends who supply them with heroin. A middle-aged man who performs drive-through weddings dressed as Elvis realizes, as he marries his first same-sex couple, that the only domestic partner he is ever likely to have is his ailing father. But when he ends his latest relationship, an unlikely friendship results.

The characters in these darkly comic stories and novella may be searching for love in all the wrong places, but they are also able to find love in the most unexpected places.

Nairne Holtz has a great skill for establishing characters and moods that really stick with you. Each story seems to contain a distinct moment more than a strict plot. Definitely the strongest part of This One’s Going to Last Forever is the characters. My favorite protagonist was Clare of the novella “Are You Committed?” She feels completely clueless compared to everyone around her at McGill: everyone–her roommates, her fellow journalists at the school newspaper, her friends–they all seem to know exactly who they are and what they’re talking about, and she’s still trying to gather enough facts to form an opinion. She doesn’t know what her sexuality is or the difference between the personal and political or what “Silence = Death” means. It makes her relatable.

A few times the book bumps into the gay pronoun problem: if you’re writing about two (or three or more) women, it’s really hard to establish which “she” you’re talking about, to it’s easy to overuse names. Overall, however, the writing is strong.

This One’s Going to Last Forever is a Lambda Literary Awards finalist in Lesbian Fiction. They are a terrific resource for finding quality queer books.

Have you read This One’s Going to Last Forever or another lesbian short story collection? What did you think of it?