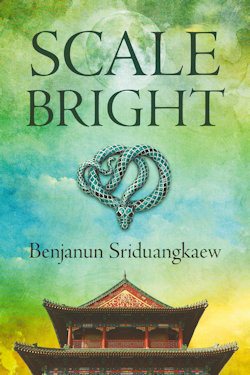 Scale-Bright by Benjanun Sriduangkaew is a novella based on Chinese mythology that takes place in modern Hong Kong. This was an interesting premise and although I found it somewhat different from the fantasy that I usually real, it came recommended by a friend, so I gave it a go.

The story follows Julianne Lau, a 24 year old Hong Kong native. She lives with her two aunts, Houyi and Chang’e who to be clear are married to each other not related! This story starts with Julianne meeting a viper, a creature that looks like a human but isn’t. The viper is draw by the divine aura around Julianne which was acquired with her living with goddesses. The viper, called Olivia or Xiaoqing tells Julianne who she meets a couple of times that she wants a meeting with Chang’e, her aunt. Grudges among divine creatures last very long and there are a lot of enemies or past enemies for such a short book.

Julianne has body image issues, self-esteem issues and had encounters with depression. However, she is trying to be better. Like her aunt Chang’e, she is kind and she tries to control her sense of wanting attention sometimes with consequences.

There are some interesting relationships in the story. First off, I want to mention that we see some of Julianne’s past and about to be past relationships with women. For being such a short recount, it’s very queer.

Chang’e and Houyi have a good relationship based on affection and trust and so Julianne takes them as role models for her love life. Houyi buys Chang’e candies dates even when Chang’e is abroad and she picked her up from the airport in a tuxedo. That’s the level of sweetness that their relationship has. Despite this, they do not spend that much time together as their divine jobs take over a lot of time. Their past as well is tangibly full of sorrow apart from love.

Interesting was to see Houyi’s relationship with Julianne. Although she is technically only an in-law, she seems to be the main ‘caretaker’ while Chang’e, with her kindness takes over soothing roles when needed.

The relationship, as abrupt and like staccato as it was, between Xiaoqing and Julianne was also interesting. Xiaoqing shows Julianne that demons are complex and tells Julianne her story, after which she says she wants Julianne for who she is. Julianne for her part doesn’t care for what her partner looks like and learns to not judge people by the myths that are on them.

‘Demons’ , in this novella, are not villanized instead they are shown to be flawed and wanting to survive but also very diverse and complex with a system of their own

The writing is very descriptive, sometimes like poetry but I felt that at times it was just stretching too much. There are some styles that I liked such as sentences with only one word to describe routines. At times, as there were two sets of names being used, it is very easy to get confused especially if you are not familiar with the myths involved. It also takes a while to make sense after the beginning of a new segment as there are time and special hops, without much explanation.

We see the briskness of Hong Kong. I think this novella captures the metropolitan feel with its description of people and business and billboards.

This story takes on elements from myths such as the gods of sun and moon and the white snake and queers them up. Apart from the queer spins and retellings, it is heavy laden with gender issues and thought. Needless to say, but I will just in case, that this story being based on myth inherits all the strange gore that myths tend to have, so beware!

To end, I thought it was interesting reading a queer retelling of Chinese mythology by a Thai author no less,  instead of British, Canadian or American. I think the style would need some time to get used to, but it’s worth to read it. It lulls between complexities of plot and gender and the easiness of long descriptions that relax you (like one of those relaxation classes).

There are more things in Heaven and Earth than are dreamed of in our philosophy.

Tally is a girl who knows a lot about heaven. She knows a lot about a lot of things and she doesn’t care who knows it. She has her future mapped out: a degree in physics, then a career in astronomy, observing the heavens through a telescope’s lens.  Her adoptive family and her best friend Shane are behind her all the way, but the summer after graduation her life takes on a life of its own.  A night of unexpected passion with Shane is followed by excruciating silence. Disappointed and embarrassed, Tally seizes on the sudden opportunity to leave New York for Washington state in pursuit of a reclusive singer who may or may not be her father. She meets the man, but he offers no answers. Nor can anyone explain the peculiarities of the island: the crows that follow Tally around, the mysteriously hypnotic singers in the local bar, the way that Tally can’t keep ahold of her memories, why she’s even thenre. More importantly, she meets beautiful, mysterious Maddy, and before too long the two of them are wrapped up in each other as time slips away. But Maddy, like everyone on the island, like the island itself, isn’t what she seems. Learning the truth about her sets off a chain of revelations about who Tally is and where she comes from.

This book was an interesting experience, though I feel the need to preface this paragraph with a major spoilers alert. Consider yourself warned!  When I learned about this book I was eager to read it and dove into my copy, gobbling it up in just a few days.  What I did NOT know is that it was the third book in a trilogy, a trilogy called the Metamorphosis Trilogy, which when I learned that, cleared up a lot of my questions.  The story is very good—gorgeously written and full of rich, round characters. Tally is smart and funny and flawed, very relatable and easy to root for. Maddie is brooding and sexy and their whirlwind romance is both sweet and hot.  HOWEVER, I was entirely unprepared for the sudden, radical, incredibly supernatural turn the story took after Tally arrived in Washington.  As they mystery built, the little magical things didn’t seem out of place. Her forgetfulness and the chummy crow just seemed like texture for Tally’s journey. When we progressed to the hypnotic song of the bar-band sirens I frowned a bit at the overkill, so by the time Tally walks across the moon-path to visit her mom in Hades I was full on ‘What the hell is going on in this book?!” This is my fault for not doing my research on the author, but I also think that picking up an interesting title without knowing of another context is not that unusual (my copy had nothing on the cover to inform me otherwise). While I still recommend the book wholeheartedly, my opinion improved only after learning of the rest of the trilogy.