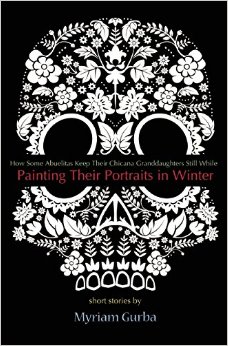 This is a book with a heartbeat, as alive as if the words were put down in blood. Probably a macabre first impression of a book, but one that I think really fits Painting Their Portraits In Winter. This is a collection of short stories, some interlinked and some freestanding, rooted in Mexican culture and storytelling both in Mexico itself and in the US. Queerness isn’t at the forefront of most of these stories, but when it does come up, it always feels spot-on to me.

I reach into Andrew’s coffin. My fingers touched his. I appraised them. They felt chilly, stiff, and anti-climactic, like omens of my future attempts at compulsory heterosexuality.

Death does play a major role throughout this collection. Oddly enough, having read this not long after Falling In Love With Hominids by Nalo Hopkinson, both books contain a story about a ghost living (mostly) unseen and unnoticed in the physical world, and they both made for fascinating reads.

Myriam Gurba shows incredible skill for language, and even when I wasn’t completely following the plot, the lush sentences were enough to dive into. I don’t feel like I can do justice to this book, but if you enjoy rich, dark storytelling, definitely pick this one up.