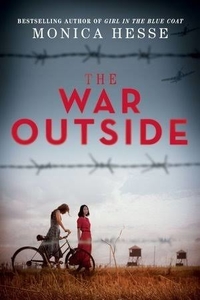 The War Outside by Monica Hesse is a historical fiction novel set inside an American internment camp during WWII. It follows the friendship of two young prisoners, Haruko and Margot, as they deal with discrimination, family conflict, and their own growing feelings for each other.

This book takes a look at a lesser known part of WWII history which is rarely taught in schools, although it should be. In fact, although I knew about Japanese internment and have done some reading about it, I did not know until this book that some Germans living in America were also interned. There’s a lot you could learn from this well-researched novel.

In Crystal City, a historical internment camp located in Texas, Haruko and Margot live on different sides of the camp, and the Japanese and Germans are both distrustful of the other. Margot and her parents are careful to keep to themselves, not wanting to associate with the Germans who support the Nazi party, and Margot is one of the few German students to attend the federal high school rather than the unaccredited German school. It is there that she meets Haruko. Haruko is suspicious of her father, and worries that he might have helped the Japanese government, and is also concerned for her brother who is a member of the all-Japanese 442nd unit in the American military.

In the midst of the tension, Margot and Haruko become unlikely friends, talking honestly together about their worries and fears. I loved reading about their relationship as they grew closer, and the trust they developed for each other was very sweet. As they slowly realize that their feelings may not be entirely platonic, the awkwardness between them is very cute, and their dreams for after they leave Crystal City and the apartment they’ll have together are so sweet and lovely. It was easy to root for them. However, their small romance does take a back seat to the other drama happening around camp, especially within their own families.

The storyline I found most intriguing was actually what happens with Haruko’s brother. As a member of the 442nd unit, he is not present for most of the book, but his absence is felt in a very real way. He also has a very frank discussion with Haruko about his depression, and I found that to be a particularly poignant moment in this novel.

Another thing that I loved was how Margot seems to be coded as autistic. I was a little disappointed that the book never addresses it directly, but it seemed too intentional to be coincidence. I talked about it with my autistic girlfriend, and she agreed. I only wish it had been stated directly in the text so I could say for certain that this was the author’s intention.

Overall, I thought this book was interesting, and the setting choice is one that I don’t see often in WWII historical fiction, so I appreciated that. However, I did have a few issues, mostly with the ending. I’ll keep this mostly spoiler-free, but by nature of discussing the ending, it will give some things away so please read ahead at your own discretion.

(Spoiler section begins, highlight to read) I felt like the ending was abrupt, and it honestly feels like the last couple chapters were ripped out. None of the characters get any closure, and, as a reader, I didn’t either.

Both Margot and Haruko seem incredibly out of character, and both of them make such cruel decisions. It was so painful to read the ending, and while I understand what the book was trying to say…. I don’t know if either character is truly justified in her actions. “War makes people do terrible things” doesn’t seem to be applicable to their situations, and it felt unnecessary and forced.

The ending also feels anti-climactic. The relationship that I was rooting for collapsed before it was even acknowledged, which was a real shame. I wouldn’t neccessarily call it queer-baiting, because it was so obviously alluded to, and the feelings themselves were quite clear, but the word ”gay” or “lesbian” was never used. Neither of the girls ever addresses their feelings earnestly, even internally. So that was a disappointment to me. (Spoiler section ends)

I would recommend this book to anyone who likes historical fiction, and wants to explore a different part of WWII. Although it is not a perfect book, the setting, atmosphere, and the characters are excellent.