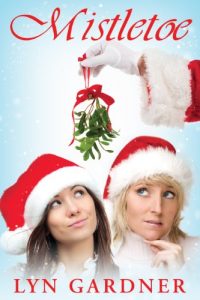 After this dumpster fire of a year, I am very much looking forward to the holiday season. Christmas music, holiday movies, and baking are the distractions I need this year. So when I saw Mistletoe on sale on the iBooks store, I jumped at the chance to read what seemed like a sapphic Hallmark movie. The novella I read wasn’t entirely the wholesome love story I was expecting, but it was very festive and fun.

This romantic comedy starts with Santa Claus. Yes, you heard that right, Santa is a real person and so are all his elves in this novella about two grown women. Calamity strikes when one of Santa’s elves realizes that, many years ago, he missed one child’s Christmas wish. It was from a little girl named Diana who recently lost her parents and wants to find her soulmate. Diana’s an adult now, and Santa isn’t about to let anyone’s wish go unanswered. Together with an elf named Percy, the two set out to set Diana up with her soulmate Jamie. Hijinks ensue as the two women meet and fall in love.

One thing I really enjoyed about this book was the characters. Remember that this is basically a Christmas movie in novella form, so neither of them were super fleshed out, and that’s okay. Both of the two love interests were very distinct from one another. Diana was sweet and kind, while Jamie was bolder. Their dynamic was very interesting and they complemented each other well. It kept me reading to see how each of them would react to different situations. I also love that they actually ended up together long term. It’s always cool to see that in a queer romance. Jamie and Diana’s friends, the side characters, were also interesting in and of themselves. My personal favorite was Diana’s Aunt Brenda, who took her in after her parents passed away. For me, the characters were the strongest part of the novella, although it is worth mentioning that they were not a very diverse ensemble.