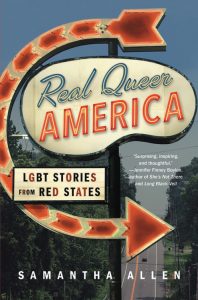 Samantha Allen’s Real Queer America: LGBT Stories from Red States is a must-read for all LGBTQ Americans, regardless of whether they hail from or live in red states. Following the motto “Something gay every day,” Allen and her friend Billy took a road trip across the Midwest and South in summer 2017, visiting places like LGBTQ centers and gay bars from Utah to Georgia, and uncovering queer and trans stories along the way.

Allen’s travelogue is an important and necessary response to the common societal narrative of LGBTQ folks fleeing their rural small towns to big cities on either coast the minute they get the chance. Allen showcases the vibrant, resilient, interconnected LGBTQ community that exists wherever there are LGBTQ folks – and especially in places where the community has had to band together and organize to push back against political or societal adversity. Allen makes no bones about the fact that life in a big (and expensive) city like New York is absolutely not for her: her book is a love letter to the places that have shaped her into the queer, trans woman that she is today, and to all the places that hold those wondrous possibilities for others in the LGBTQ community.

The LGBTQ community Allen depicts is so much more than gay bars (though she certainly depicts some awesome ones, like the Back Door in Bloomington, Indiana, and WonderLust in Jackson, Mississippi): she tenderly paints a picture of queer gathering spaces and networks of support, and she places the people who bring these spaces and movements alive front and center. Real Queer America reads smoothly, like cruising down the highway with the wind in your hair and the open road ahead of you – you feel like you’re along for the ride with her and Billy, like you’re hearing from the folks she interviewed yourself, firsthand. Allen invites you into their world, and their struggles and triumphs become your own, all members of one big, beautiful community together.

Throughout the book, Allen pays particularly loving attention to sharing the stories of trans and gender nonconforming folks across the southern and midwestern United States, starting with her own story of the development of her identity, from attending BYU as an unhappy Mormon student furtively wearing women’s clothing, to coming out and transitioning as a graduate student at Emory, to meeting her wife-to-be on a summer research trip to the Kinsey Institute (you just can’t make up a queerer meet-cute!). Through her travels we meet trans parents and partners, business owners and politicians, activists and youth – each person richly described, and illuminated by their relationships to the places that have made them the people they are today.

Real Queer America is a gorgeous patchwork of a book, bringing together so many places in America and people in the LGBTQ community, interwoven with Allen’s thoughtful musings and memories, solid yet accessible connections to theory and statistics, zippy pop culture references, and even a center spread of road trip photos (be still my heart!). It’s the definition of a crowd-pleaser, with something for everyone – approachable and thoroughly enjoyable for anyone on the LGBTQ spectrum, no matter where they are in their own journey. Allen’s work pays tribute to the undersung backbone of queer America.