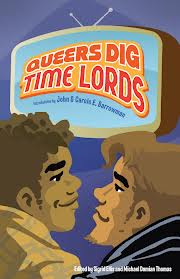 I feel like, really, if this book is for you, it probably already had you by the title. This is a collection of essays by queer Doctor Who fans about how their fandom and queer lives intersect. When I heard that this was coming out, I was ridiculously excited about it, even more so when I got a review copy. I would categorize myself as a casual Doctor Who fan. I became a fan through New Who and have seen most episodes only once. I do look forward to new episodes (less so with Moffat’s direction) and I have been slowly working through Classic Who (I’m up to the Fourth Doctor, though I’ve only been watching complete episodes, not reconstructions). So that’s my background going into this book.

In some ways it reminds me of when I was at Leakycon (a Harry Potter convention) earlier this summer. There was an LGBT Meet-Up, and most the time was filled with people coming to the microphone and talking about how being a fan of Harry Potter has helped them or interacted with their experiences as a queer person. Queers Dig Time Lords is similar, but with Doctor Who replacing Harry Potter. It’s generally fairly casual and autobiographical. I was actually surprised that there was a fair amount of lesbian content, considering that many of the essays expressed that the Whovian fandom has usually been associated with gay men (which I actually didn’t know before reading this! I also didn’t know that RTD was apparently repeatedly accused of having a “gay agenda” on Who.) It was still more focused on gay men, but there was a fair amount of lesbian and bisexual women stories, and a few that touched on being a trans* fan–one in particular, equating transitioning with regenerating, was especially good. The collection also mostly tells stories about growing up as a queer kid (usually a gay boy) with Classic Who. Even though that’s not my experience with the show or the fandom, it was still really interesting to read.

I got through this book quite quickly and really enjoyed it. If you’re a queer Doctor Who fan, I definitely recommend picking it up (but you were probably already wanting to). Even though there is a recurring theme of gay boys growing up with Classic Who, there is still a lot of different subject matter and opinions covered. Essays present entirely different views about what periods of the show were most queer-friendly and why, about certain character’s orientations, about writers’ queer positive slant or homophobia, etc. One essay explores the BDSM subtext of the Doctor and the Master. Another praises Mickey as a queer icon. One details the lesbian subtext of a Classic Who episode. The Doctor is cast as asexual, heterosexual, bisexual, ambiguous, shifting, and more. A couple essays focus more on Torchwood. And there are some essays that express as much disappointment with Who as love for it. It was an enjoyable read for me that made me want to dive back into Classic Who (with “camp” goggles firmly in place) and but on some New Who repeats as well.

I’ll share with you the quotation from one essay that made me put down the book and rush to tumblr to share it right away.

Much of my experience of fan culture over the last five years has been one of conflict. There’s a lot to be fought and a lot to be fought for when you’re a queer woman of color with a hunger for stories: consuming film and television and books is often like being handed beautiful, elaborately sculpted meals with bits of cockroach poking antennae and carapace out of the sauces and soufflés. You try to eat around the bugs, try to surgically remove them, but you can’t quite get away from the fact that they’ve flavored the dish and will probably make you sick. But you have to eat, or go hungry.

That’s by Amal El-Mohtar, and is actually from the Master/Doctor essay!  Here’s another: “Fun as it would be, exhaustively combing through all the Doctor’s and Master’s interactions over the years in order to underscore their validity as a One True Pairing is beyond the scope of this essays. (And, frankly, unnecessary, because their OTP-ness is as obvious as the sun is hot. And hot as the sun is obvious.)”

I did have a minor quibble with Carole Barrowman is dismissive of asexuality in her introduction (and I rolled my eyes at one essayist insisting that he is homosexual, not gay, because gay is all about gay pride and gay bars and pride parades and he is not that sort thankyouverymuch), but that was about all the complaints I had. Instead I noted a couple of great passages, like this one detailing one point of a list of things gay men may enjoy about (Classic) Doctor Who (or “Doctoroo” as it always sounded to him as a kid):

Doctoroo’s special effects always seemed to have a touch of drag queen aesthetic about them.

So if you’ve been tempted to pick this one up, or if you’ve just realized it’s existence now and are thinking about giving it a try, I would recommend not fighting it. And let me know what you think about this one!