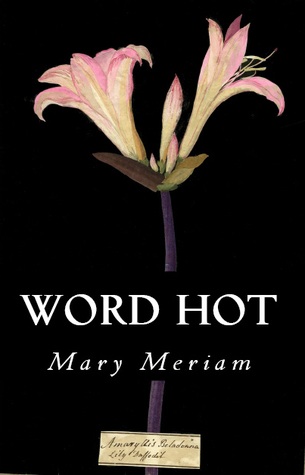 Word Hot is comprised of 22 short poems, each less than a page long. The book is divided into two sections: To Lillian and Muse of Two, though I couldn’t quite figure out the commonalities within each section that caused them to be grouped that way. There is an ongoing theme of unrequited or lost love throughout the collection, and a muse is mentioned in many poems. Often the poems have strict, simple rhyme schemes.

Full disclosure: I don’t read a lot of poetry, and my favourite poets (such as Shane Koyczan, despite not being a lesbian) tend to be slam poets, or spoken word poets. The poetry I enjoy most is usually at least somewhat straightforward, though beautifully worded. I often get frustrated with poetry that doesn’t seem to be saying anything in particular, just assembling a labyrinth of incomprehensible phrases. Luckily for me, the language in Word Hot is usually easy to read, but the imagery of the poems seemed abstract. I couldn’t quite parse out what was being described, and sometimes lost the subject of the sentence as it spread over many lines.

There were a few poems I enjoyed (“An Entering” and “Portrait of a Woman Revealing Her Breasts”), but nothing that really stuck with me. I think this is entirely a matter of personal taste, though, and it looks like most if not all of the poems have been previously published in literary magazines–so don’t take my opinion as a condemnation of the quality of the poetry!