I had been reading a lot of heavy things when I picked up Madeleine George’s queer YA novel The Difference Between You and Me and it pretty much fulfilled every expectation I had; in fact, it was actually deceptively complex, despite the fact that it’s a quick read.  The Difference Between You and Me is a classic opposites attract story in some ways, but it’s refreshingly not a coming-out story, nor is it a they-live-happily-ever-after.

What it is is a story about three very different teenage girls, told alternately from each of their perspectives.  Jesse is an anti-assimilationist lesbian who spends her time plastering her high school with manifestos defending the rights of weirdos everywhere.  Emily is a popular, uptight student council vice-president who doesn’t like “labels” (i.e., is bisexual and doesn’t want to admit it).  Esther, whose voice doesn’t enter the narrative until a bit later, is a serious activist with a tough façade but a hurt, squishy interior.  Jesse and Emily are having a secret affair (surprise!) but Emily doesn’t want anyone to know about it and still has a boyfriend.  Esther is Jesse’s new friend and partner in activism (spoiler alert: you think she and Jesse are going to get together in the end but they don’t).  The conflict in the story is when a company that’s not called Walmart but is obviously a stand-in for Walmart wants to build outside the town and Emily is revealed to have struck a deal with the company to raise money for the school.

I actually think of the three girls George does Emily’s voice the best.  For example this is her while supervising the “refreshments table” at a school dance:

But to be honest, at that point I was getting pretty annoyed with some of the people working under me on the refreshments committee (like Lauren Weiss and Kim Watson and Kimmie Hersh, to name three) because they kept putting out more and more Costco-brand cheese curls, which were the only refreshments we were serving that night, even though I told them repeatedly that they had to ration the snacks so they would last for the entire event, and all of a sudden I was just like, you know what, screw this, let them put out however many cheese curls they want, whenever they want to. And I told Michael I had to use the restroom and I went to find Jesse.

This is her talking about her boyfriend (this is a great testament to poor teenage boy kissers everywhere):

“When me and Michael kiss, it’s like I’m making out with a cut cantaloupe. He is the wettest, squishiest kisser on the planet. He’s so cute from a distance, you know, he’s such a good-looking guy, like a male model practically, but then when he goes to kiss me it’s like all the muscles in his face go slack and his lips get all spongy and loose and he opens his loose face and sort of lays his spongy lips all over me and drools his melon-juice spit into my mouth. It’s horrible. I don’t mean to criticize him, I’m sure lots of other girls would think he was a totally amazing kisser, it’s just … sometimes I have to pretend he’s getting too powerful and intense and I push him off me, but really I’m pushing him off me because he’s getting too disgusting.”

Jesse is pretty straight-forward from the beginning, and is a fairly typical stock alternative angsty character—not that she’s not fun for that reason.  But she’s more of a caricature and was therefore less compelling and real to me than Emily, who I found fascinating.  Although she looks on the surface to be quite different from Jesse, and might be constructed as the villain of the novel (there are certainly plenty of reviews that see her that way, which is disappointing and biphopic, to be honest), she’s actually a lot more complicated.

I think what George wanted to do—maybe she doesn’t fully succeed—is show that the girls might not be as dissimilar as you might think.  Both are ambitious, motivated, and concerned about making the world better: they just go about it in very different ways.  Maybe I sympathized with Emily more because Jesse’s let’s-overturn-the-system approach strikes me as naïve and unrealistic, and I found it weird that the book doesn’t want you to read it that way.  Emily is naïve too, and ignorant, but this felt totally realistic to me, for a teenage girl from a privileged background afraid to come out.  She kind of reminded me of Cher from the movie Clueless, actually: lovable despite being privileged and you know, kinda clueless, because she’s genuine and earnest and caring.

That said, I agree with a lot of the points that Sarah makes over at the bisexual books tumblr in her review: namely, it is really disappointing that the cheating, conformist character is bi.  George should have done a better job resisting the urge to make Jesse a heroine and Emily a villain.  I see how it’s easy to fall into that way of thinking, as a writer and a reader.  But I think Sarah makes a mistake in her review by falling into the trap of thinking of the girls that way, because you don’t have to. I don’t think the novel condemns Emily for her choices; I think it’s actually sympathetic, if you read closely.  It’s realistic that the novel ends and Emily still hasn’t figured things out and is still in the closet.  It’s legitimate that a teenage girl wouldn’t feel comfortable coming out and in some ways it’s unfair to expect her to.  I think her refusing to label herself is classic internalized biphobia and the novel wants you to read it that way.  As a bi woman who hasn’t been open about it for that long, I actually really identified with her.  So is it an ideal representation of a bisexual teenage girl?  No.  Is it authentic and interesting and complex?  Yes.

Don’t judge this book by its cover – or by its title. While The Difference Between You and Me sounds like your typical novel about an unlikely high school pair, fear not – Madeleine George’s uniquely realistic teenage voice makes this book stand out among its queer YA companions.

Emily is the preppy, intelligent, blonde Vice President of student council with the perfect boyfriend. Jesse is the combat-boot-wearing, short-haired lesbian radical with an affinity for writing manifestos proclaiming freedom for all weirdos. Esther is a confident, quirky, bona fide activist, who idolizes Joan of Arc and spends her weekend mornings peacefully protesting with her elderly friends.

Emily and Jesse have undeniable feelings for each other, but barely make eye contact outside of their weekly rendezvous in the library bathroom. Jesse meets Esther at Saturday detention, and the two become allies during a controversial issue at school. As it becomes clearer that they are pitted against each other in the debacle, Jesse and Emily have to decide whether they will sacrifice their secret relationship to further their causes.

The three girls view the issue in vastly different ways, and as the situation grows more complex, so too do their methods of resolving it. It seems like each girl portrays a different type of activism – Emily’s well-intentioned but flawed approach is a direct contrast to Esther’s single-minded pursuit of justice for all. Jesse lies somewhere in the middle, and the more George allows her to question her identity as an activist and as Emily’s secret fling, the more interesting and unique the story becomes.

It is clear that George knows how to tap into the mind of a teenager, and is masterful in conveying that mindset to the page. Her witty dialogue and first-person narration is so well written that it seems effortless, and certain sections of the novel flow more like a monologue than a book.

Perhaps it is George’s background as a playwright that allows her to write the stereotypical mean girl as a sympathetic character. Emily’s voice is as genuine as it is frustrating, as she struggles to reconcile her secret feelings for Jesse and her role as a sort of public figure at school. I found myself wanting to save her from the collision of her two perfectly managed worlds rather than losing patience with her.

Both Emily and Esther tell their own stories, but Jesse’s sections are written in third person, making the transition between chapters a bit jarring. I wish that Jesse’s had been the primary voice of the novel – readers will want to be in her mind as she struggles between her commitment to the cause and her adoration of Emily.

While George compels both Jesse and Emily to reflect on their choices as the story unfolds, the moral lesson is surprisingly not trite. As an adult reading YA, it is often easy to predict how the characters will develop, but Jesse and Emily resonate in a way that makes their growth throughout the novel less cliché.

Overall, I would recommend this book to anyone who loves a gutsy teen protagonist and a surprisingly romantic bathroom make-out scene. 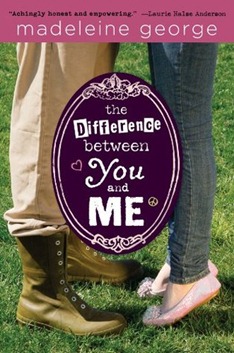 I have a soft spot for lesbian teen fiction. Mostly because I feel like it’s a really important niche. It’s when many people first start coming out or questioning their sexuality, and it is really reassuring to be able to see a representation of yourself in fiction, especially one that reassures you that it can be okay. Unfortunately, the list of lesbian teen books is quite short. (Good Lesbian Books has a good list.) So I was excited to get another lesbian teen book to review, especially one that is from a bigger publishing company that has the chance to be more widely distributed.

I started The Difference Between You and Me at about hour sixteen of the readathon, and it was a great choice to hold my attention at that point. I’ll list my impressions as I stated them during the readathon, because I think they give you a good idea of the book. (Minor spoilers ahead)

It really captures the drama of high school romance, where everything is high stakes and rollercoasters of emotion. It was also interesting to read a lesbian teen book that isn’t so much SOULMATES FROM FIRST GLANCE as it is a more typical high school relationship, which may be very emotional, but is unlikely to last forever.

I really loved the main character, Jesse, and her activist, weirdo tendencies. I haven’t read a lot of teen books that have main characters that didn’t fit in because they choose not to fit in. Because they really are weird, not just “uncool”. What can I say, I related to her. And I’m a sucker for an anti-capitalist subplot.

The writing was also compelling. Malinda Lo posted about the excellent kissing descriptions in The Difference, and I have to agree with her. I stopped and read out a different kissing passage to my partner when I read it the first time. I think I will finish the review with it to entice you to pick up The Difference Between You and Me, because if you haven’t noticed, I really enjoyed it.

Emily’s face, so sunny-cheerful in everyday life, so bright and cute and alert, deepens and darkens when Jesse is kissing her. Her eyes fill with smoke and fall half closed, her cheeks flush. Sometimes she slurs her words. A lazy, wicked expression comes over her face, like she’s a little bit hungry and a little bit dangerous—good for nothing, ready to do damage. She can stop Jesse’s heart when she looks at her like this.