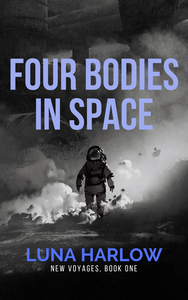 Luna Harlow’s Four Bodies in Space reads like a queer pastiche of Star Trek: The Original Series. Stop me if you’ve heard this one: our protagonist, Commander Solaris, is a very emotionally-restrained biracial scientist with psychometry and pointed ears on a ship run by a dramatic captain and the cult of personality he’s gathered around himself. Their mission: escort diplomats of different species across the galaxy so they can make advantageous trade deals. Captain Jennifer Li is both brilliant and charismatic, and the person tasked with investigating when the guests and crew are murdered en route.

I’m not saying that this reads like someone’s genderswap AU, but it does happen to ring some bells!

The world-setting reads like the a future extrapolated from the sixties as well, like highlighting that the crew is “a series of downcast pale white boys with brown hair” at the Captain’s request, a man married to a woman twenty years younger than him (who flings herself at the protagonists…), or a secondary character asking whether Solaris is frigid or easy based on racial stereotypes, and yes I did have to read that with my own two eyes in this, the year 2020. I assume that the background misogyny has been carried over so it can be engaged with in future books, but it’s not really dealt with here. On the flip side, I did enjoy the way that the references to bizarre events were brought up, because all of the “Oh, I remember this mirrorverse episode!” was worked into the story quite naturally, and treated as normal hazards of the job! I enjoyed that a lot. I did think that the writing of the initial section was a little stilted until the book switches to Jennifer Li’s point of view and I realised that it was just Commander Solaris’ narration. There’s a beautiful level of deadpan snark in her descriptions, which works great with the tropes Four Bodies in Space is using. Like, at one point she describes the competent (female) second-in-command subsuming her life into the (male) captain’s as “unfortunate heterosexual longings” and I was IMMEDIATELY sold. So there is a basis for my idea that these tropes are here on purpose!

The actual mystery plot is quite flimsy. There are some leaps of logic that were a little hard for me to follow, and some of the denouement doesn’t hold together if you’re reading it as a mystery. But if you’re reading it as the lead-in to the inevitable partnership between Solaris and Li, it all works hangs together fairly well! I will say that some of that inevitability is predictability as well – the beats of how their relationship forms will not surprise you! But it’s fun, and it’s a solid set-up to a series, so I’ll be keeping an eye out for future installments.

[Caution warning: sabotage, murder, racism against fictional races, misogyny] [This review is based on an ARC from Netgalley]