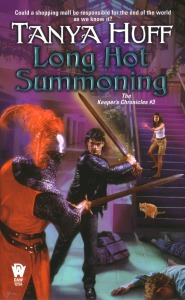 The Long Hot Summoning by Tanya Huff follows 18-year-old Diana Hansen, a Canadian teenager who comes from a line of Keepers, members of the Lineage who keep the dark and light in balance. Diana has just completed her final day of high school when she is given her first Summons, she must pass to the Otherside and help a group of street kids turned elves to stop the dark side from completing a segue that will give them access to the world.

Cats with an attitude, a cocky King Arthur, an over-protective older sister, and a distractingly cute girl – what could go wrong?

The book has a few plot lines, and the story sometimes follows Diana’s sister Claire, Claire’s boyfriend Dean, or the sister’s cats Sam and Austin, but Diana is still the protagonist.

I would most likely consider Long Hot Summoning to be an urban fantasy novel: it is set in a mall, after all, even if that mall is in an alternative reality. It is a fun read, with a believable magic system that incorporates important rules and consequences for breaking them. You can’t just magic yourself out of a problem without giving the bad guys an advantage.

Diana is a likeable character, who errs on the side of action, rather than caution. She knows her strength, and how to use it, but doesn’t always use it at the right time–to be fair, kissing a cute girl when the world is ending can be distracting. She is snarky, sarcastic, and full of teenage insolence, but is still good at heart and takes her job seriously. The Canadian and early 2000s references were also an enjoyable part of the book.

If you have the chance, I would definitely recommend reading the Long Hot Summoning.