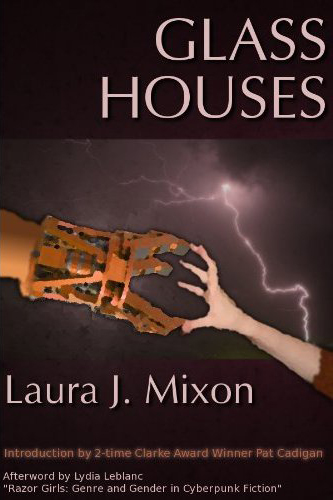 I read about Laura J. Mixon’s “Glass Houses” in K. Cadora’s article “Feminist Cyberpunk.” Cadora, author of the novella “Stardust Bound” (which I recommend), argued that, in “Glass Houses,” Mixon translates the tropes of cyberpunk out of a male-only worldview into a wider, more equitable worldview. As a sometimes cyberpunk and noir fan, I was looking forward to reading this revelation for the genre.

Unfortunately, “Glass Houses” is very straightforward. At just over 200 pages, it has an extremely simple story to tell, and it tells it without a single surprise. In a near-future world suffering from global warming, down-on-her-luck techie Ruby operates waldoes for a living. Waldoes are robots that can be controlled at a distance by the minds of their operators; Ruby uses her waldoes to scavenge and salvage, recovering loot from abandoned buildings for clients. As the novel opens, Ruby discovers a rich old man trapped in a tottering skyscraper in the middle of a hurricane. She tries to rescue him and fails, but she *does* manage to steal his jewelry and a sealed envelope he was carrying. Cue the countdown as she, inevitably, has to figure out who *else* wants these items and how she can survive having stolen them.

There’s a lot that *could* happen in this novel, but little of it does. It could be a mystery novel, noir/cyberpunk-style, but everyone’s motivations come clear in the first half of the book and there’s no whodunnit to wonder about. It could be an exercise in world-building, exploring a world wracked by global warming, in which access to climate control is class-based and people go outside as little as they can, but the worldbuilding aspects barely go deeper than the cosmetic. It could be an action-film-on-the-page, but the two fight scenes that are clearly meant to be the story’s highlights come off flat and adrenlineless, as Mixon skips over large chunks of action in a sentence or two and fails to describe events with the precision and impact needed to make them live in a reader’s mind.

It could also be a learning-to-have-faith-in-yourself story, and it *almost* is. As Ruby navigates the challenges of the storyline, she begins to trust herself in the real world, interacting with it in person as well as through her waldoes, to value herself and her body, and to separate herself from her toxic lust/love crush on her roommate, beautiful party girl Melissa. (And, if you’re worried she puts aside her flawed f/f relationship for a m/f one, she doesn’t. She stays firmly attracted to women throughout the book.) This was the strongest aspect of the novel, and it came closest to working. The problem? It’s hard to care about Ruby’s development because, as a reader, you know so little about her. Sure, you’re handed a smattering of backstory details, but I finished the novel not even certain how old she was. Is she in her 20s? Her 30s? Even possibly approaching her 40s? It’s hard to say. What made her so afraid to leave her apartment? Why didn’t she ever have a relationship before her crush on Melissa? Ruby’s crushing lack of belief in herself, in her physical body, is central to the novel, and the reader is told little about how it developed–so it’s difficult to feel invested in her struggle to overcome it.

After finishing “Glass Houses,” I’m still looking for that woman-authored cyberpunk revelation. This isn’t it. Though the focus on wrestling with body image and self-confidence is nice to see, I’d reread Melissa Scott’s “Trouble and Her Friends” three times over before rereading “Glass Houses.”