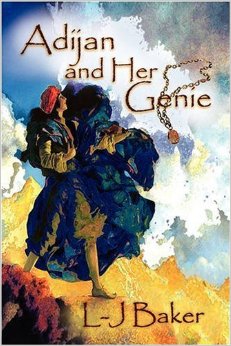 I love queer fairytale retellings! Although I do not think this is much of a fairytale. It’s set in the Arabian Nights fantasy world and has a few elements of the folktale Aladdin, in the sense that there is a poor messenger who’s however a girl and there is a genie, who’s not really a genie.

Adijan is a messenger girl, who dreams of having her own business and is a bit too fond of drinking despite being really hard-working. She’s married to Shalimar, a very kind woman who is always happy and yet always thought of as simple, much to Adijan’s annoyance. It is evident that Adijan loves Shalimar, but she is also slave to vices and wasn’t such a good spouse. This book, full of adventure and Adijan being kicked out from countless places, follows the journey of Adijan to try and get back Shalimar from where she is being kept by her brother Hadim.

While set in an invented Arabian country, Adijan and Shalimar’s relationship is accepted and legitimate. The problem lies in wealth not in their orientation and love. Something that really bothered me was that Adijan was continuously misgendered and most times she did not correct these assumptions where from her gender expression and clothing her gender was judged.

Adijan and the ‘genie’, don’t really get on at first. However, I thought it was great that even though they did not like each other, they were respectful, using correct names, considerately describing time and place and consoling one another. They eventually come to understand and care for one another. Nonetheless, you also see two people battling their wills against each other because they both have big and fundamental dreams.

Injustices to the social system, especially in courts and wealth are addressed. It’s a book that says a lot about non-materialistic values. For someone that was looking to get rich, Adijan got that freedom and love were priceless. Privilege was understood as it was lost. For being a fun book, it also has serious themes.

I really enjoyed the characters of Zobeidé once she stopped getting on my nerves, and of Adijan’s aunt Takush who owns a ‘friendly house’ and her suitor Fakir. A bonus in this book were the insults which often contain some form of ‘camel’ to them.

I liked how Zobeidé did not forgive simply because her old tutor apologized and said he was set up to do what he did. Stripping freedom from someone is inexcusable.

This book ended on a great note. Something that was lost, even if in a land of magic, was still not magically made better and in that it was realistic. To end, you find yourself being angry at Adijan, then pitying her and then laughing at something. This book is a fast read and a true adventure.

Anyone looking for a good lesbian love story that takes place in the medieval period should definitely try Lady Knight by L-J Baker. It has a perfect blend of romance, battles, and intriguing characters.

The story opens with Riannon, an open female knight who is rejected by almost everyone who learns her true identity. She is honorable and chivalrous, but people only see her as a misfit. She is saved from a mortal wounding by her cousin, the queen’s sister Aveline, and is now under her services. Aveline is plotting a holy war, and selfishly tries to become a leader of the highest religious order.

Eleanor is a beautiful and wealthy widow, who catches the eye of many a man. But she has had enough of arranged marriages and wants to keep her freedom. When she first meets Riannon, the two have an immediate attraction to each other, and finally they become lovers. But can two medieval women really end up together?

The story is set in a fantasy world with magical healing abilities and charmed swords. Other than that, Baker paints a very real medieval world. The cultures and countries, though made up, strongly resonate with our world. The dialogue between the characters is interesting, as they speak the way a medieval person might have. The customs and the religion are invented so well they are almost real; what with the prayers they utter, and the offerings they make to their gods and goddesses.

Besides the romance, there are some action sequences: battles and duels which Riannon must overcome. There are other hurdles as well, such as Aveline and her sister each using the two women for their own selfish purposes, misogynist men, an impending war, and the ghosts of Riannon and Eleanor’s own pasts.

I love how I came to know both Riannon and Eleanor. All throughout the book, bits and pieces of their backgrounds come to light, and by the end the pieces are woven into a history about each woman. This added more to their already well fleshed out personalities. It also made the book richer in detail.

Lady Knight is a gripping read, as well as heart-warming in places. I’ve read this book five or six times and have never gotten tired of it. For a lesbian/medieval romance, it was everything I had hoped for. Though it may not appeal to some, for others this gem of a novel will make great reading.

[Also check out Anna and Spencer’s reviews of this book!] 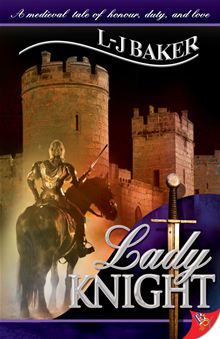