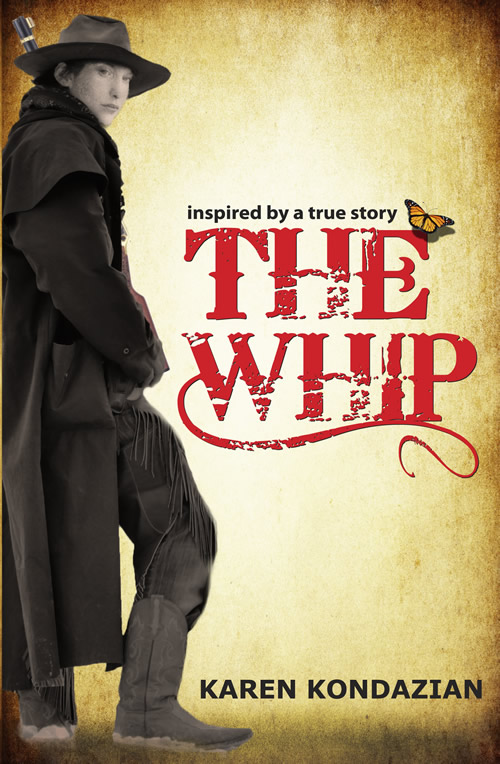 I will admit, I was a little wary of picking this one up. It has a very similar premise to The Rebellion of Miss Lucy Ann Lobdell by William Klaber, and I felt really conflicted about that book. (Both are fictionalized versions of the real lives of women who lived as men in the 1800s in America.) I’m glad I read The Whip anyways, because although I did have some issues with it, I found it to be an engrossing read. Even when I didn’t like aspects of it, I was compelled to keep reading, and overall it was definitely enjoyable.

I do have to get a few things out of the way first: one is that this book has pretty minimal lesbian content. I had so many thoughts while I was reading it that I really wanted to put it into a review, but it’s definitely not primarily a lesbian book. At most Charley is attracted to men and one woman. But I’ll get into more detail in the spoiler part of the review. The other point I want to make is that there is a lot of triggering content in this book, including rape, abuse, racist slurs, and violence. Again, more on that in the spoiler section below. Usually I try not to include spoilers in reviews, or at least just include small ones that you have to highlight to review, but in this case the biggest questions and opinions I have about this novel take place later in the book, so it will be spoiler talk onward after the spoiler tag. (Also, if you don’t want to be spoiled, don’t read the back cover or the blurb.)

As I mentioned, this is a novel based on a true story. Unlike The Rebellion of Miss Lucy Ann Lobdell, though, The Whip seemed to mostly just be inspired by her life. As far as I could tell by some cursory googling, Kondazian added a whole lot of purely fictional elements. But that may be why I found the plot to be much better paced than The Rebellion. It is, however, a life story of Charley, and covers from her infancy to her death, but not in that order. Instead, The Whip opens (after a poem, two epigraphs, and a letter to the reader) with Charley’s death, then backtracks to the beginning. I actually found this to be an effective technique, because this sort of book that spans a whole life necessarily ends with their death, but that can seem anti-climactic. By preparing us in the beginning with Charley’s death at an old age from tongue cancer, it makes for a more satisfying conclusion.

With the main character’s death beginning the book, I should have been prepared for this to be a bleak story, but it did get a lot darker than I was expecting. From Charley’s death scene, I inferred that she had a good life, though difficult. I was… incorrect. The Whip is dark, even verging into melodrama, especially during Charley’s childhood in an orphanage. Another orphan takes her under his wing, but the relationship gets twisted, vaguely reminding me of Catherine and Heathcliff in Wuthering Heights. The writing itself can also be melodramatic, and occasionally seems awkward. It usually is matter-of-fact, but slips into some declarations that don’t match the rest of the narration, such as the beginning of chapter twenty-one, which muses on the nature of time for a long paragraph. Another odd moment is when we jump directly from Charley at 13 to her at 35.

Based on the premise of the book, I assumed most of the novel would follow Charley’s wild, disguised, stagecoach driving days. In fact, “Charley” only emerges in Book Two, halfway through The Whip. Everything previous to that is Charlotte’s story. Book Two does seem to eclipse Book One, though, making the previous events just seem like backstory to Charley’s identity. One of the small things I appreciated in The Whip was when Charley realized that she was not the only one to have taken on this persona: that there were other women living as men for the same kind of reasons she was: she wasn’t the one exception.

And onto spoilers, where I discuss racism, anti-racism (?), and the minimally lesbian content in The Whip.

The theme in The Whip that I found the most interesting was Charley anti-racism. Near the beginning of the book, we see Charley arguing for rights for black people, and challenging anyone who says otherwise. Later, we find out that Charley was practically raised in the orphanage by a black man that she considered a father figure. When she is older, she gets into a relationship with a black man–an escaped slave–and they become practically married, living together and having a baby together. They live outside of town, trying to escape the racism and hatred of the town, but it isn’t enough. This is the part of the book that would be extremely triggering. Her husband is lynched, and the baby dies as well. I know that this is not unrealistic of the time period, and maybe that needs to be represented. But at the same time, Byron (her husband) really gets very little time in the scope of the book. He’s only around for about 30 pages. I think part of the reason this storyline was included was to explain the real-life fact that Charlotte Parkhurst was discovered to have had a child, and kept a baby dress in her possessions. I think it’s also to answer to a newspaper article in 1880 excerpted in the book, which after finding out Charley was a woman, notes “…there must have been a cause, a might cause.”