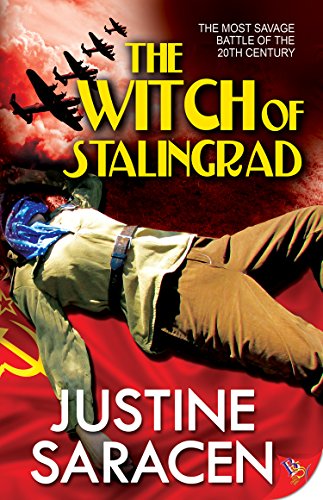 Justine Saracen has written many historical novels featuring homosexual and transsexual protagonists. The Witch of Stalingrad is a lesbian adventure/romance novel set in the last years of World War II.

It’s 1941, and the Russians are trying to push back the German soldiers from their country. Marina Raskova, a respected pilot, starts three different aviation units that include women. The most famous is the 588th Night Bomber Regiment, where the pilots dropped bombs on German positions on the Eastern Front every night. The Germans referred to these female pilots as Nachthexen, or “Night Witches”. Throughout the war, the night bombers remained an all-female unit, including the navigators and mechanics.

In the novel, Lilya Drachenko joins the night bombers to protect her homeland, going on countless missions and later transferring into a fighter regiment, becoming one of her country’s most revered pilots. Meanwhile, Alex Preston, an American photojournalist, is sent to photograph the night witches for her newspaper. Initially naïve about the pilots and the realities of war, she travels to Russia and meets Lilya, along with many others she soon comes to consider family. It is love at first sight for Alex and Lilya, but they both know they have to keep their feelings secret. Later, they are separated by their different obligations, and as the war draws closer to its climactic end, Lilya and Alex find themselves in all sorts of hardships with only their love for each other to keep them strong. If they survive the war, will they see each other again?

The Witch of Stalingrad is one of the best lesbian historical novels I’ve read. Justine Saracen obviously did her research into the events on the Eastern Front. Alex and Lilya’s adventures aren’t centered entirely on the night bombers, which Saracen more than excelled at portraying. The novel also includes the conditions of POW camps, citizens who were affected by Stalin’s purges that left thousands dead, and the camaraderie between strangers in terrifying situations. One example is when Alex met a group of medics who literally ran across a frozen river to the frontlines and carried any wounded they could save back with them for medical treatment. In the night bomber regiment, the pilots and navigators had to fly in poorly equipped U-2’s to their targets while their mechanics worked around the clock repairing planes and re-arming them. One of my favorite characters was Inna, Lilya’s loyal mechanic, who would always have the plane ready to fly on another mission just minutes after Lilya’s landing. It was humbling to read about how these men and women sacrificed so much for each other, and the ordeals they experienced were heart-breaking.

Another highlight of the novel is the historical figures Justine Saracen put into her story. Lilya’s character was actually based off of a real combat pilot, Lilya Litviak. Marina Raskova, Stalin, and Eisenhower also made appearances. This gave the story a more authentic feel.

This novel is more of an adventure than a love story, so throughout most of the book Lilya and Alex are in different places. When they are together though, the tenderness between them is real, and it’s clear they respect each other. Even though Lilya and Alex have different political views, they get past their disagreements. And both of them are willing to move mountains to protect each other.

One aspect of The Witch of Stalingrad that confused me was the narrative. In the beginning of the book, the story switches equally between Lilya and Alex; then suddenly the middle of the story is told only from Alex’s point of view, dropping Lilya’s. It was disappointing, because I would have liked to read Lilya’s stories in her perspective rather than hear second-hand. Lilya’s voice rejoins Alex’s in the last third of the novel, but I still found it strange that the narrative shifted the way they did. It was also hard to keep track of events because dates weren’t always clear.

But other than those reservations about The Witch of Stalingrad, I thought the story was fantastic. This novel isn’t only for fans of lesbian fiction, but anyone who has an interest in women’s roles during World War II. 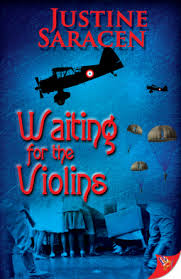 I read Justine Saracen’s Waiting for the Violins because it’s chockfull of hearty elements that a make up a good tale: espionage, clever women, French poetry, and romance. Set during WW2, an English nurse, Antonia Forrester, is injured at Dunkirk. During her recovery, her past experience and French skills catch the attention of the British government, and she’s offered a position as a spy in occupied Brussels. She accepts. Meanwhile, Sandrine Toussaint, a Belgian, is working on a Resistance movement of her own.

The book starts immediately on a note of high action, and the excitement continues throughout. It delivers the essentials of an espionage story – full of the ploys, traps, and deceptions that are a pleasure for the reader to decipher. However, it’s also held back by its mediocre prose. The writing is never bad, certainly, but it is a tad stale. Saracen makes what feels like “newbie mistakes” in terms of the narrative. Most of the emotions are told rather than shown, and the point-of-view sometimes switches between omniscient and third person, particularly at the beginning of chapters, when an omniscient narrator will neatly outline the book’s current timeline to the reader before dropping the reader back inside a character’s head (i.e. “While Sandrine was doing this, Antonia was doing this. Antonia thought that…” In cases like this, the reader is apparently in Antonia’s head – but if that’s true, how could Antonia possibly know what Sandrine’s doing?).

There are some general faults in the pacing as well. Sometimes the twists – although ingenious and exciting – are delivered too quickly. On the other hand, Saracen has clearly done her research. The setting and era are woven into every page, and just as the characters’ lives revolve around the war and Resistance, the reader, too, is never permitted to forget that tragedies are taking place all across Europe.

My favorite part, of course, is the romance. A pet peeve of mine is when I can’t fully figure out why two characters would be attracted to one another in a romance story. It was no mystery with Sandrine and Antonia: they’re both brave, self-sacrificing, and very, very smart. Obviously they have chemistry. And in tune with their self-sacrificing natures, they’re also willing to set aside their passion when it’s more appropriate to acknowledge the darkness happening all around them. Not to say that they never get their moments.

So while Waiting for Violins isn’t a flawless book, it’s worth a read. If you like books about WW2 or spies, or simply like reading about incredibly clever and brave women, this is a story for you.