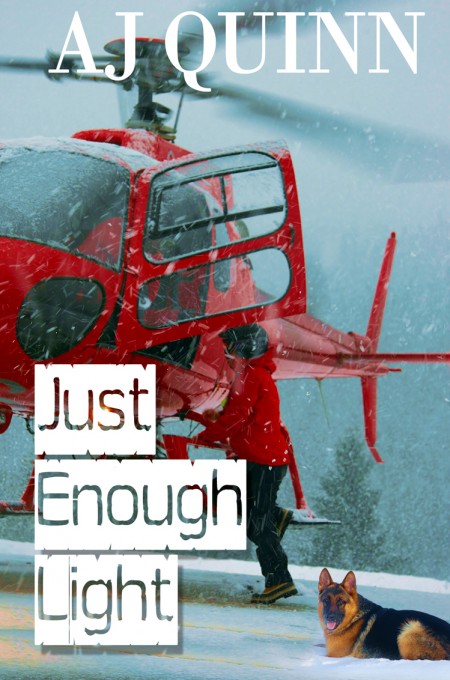 Just Enough Light by AJ Quinn (Bold Stroke Books) is a romantic thriller between two women working at an isolated Search and Rescue center in the Rockies. The setting is captivating, the romance challenging and satisfying, although the mystery suffers a little in pacing and some dots just don’t connect.

Kellen Ryan is a tough, worldly, skilled elite Search and Rescue instructor who was injured in the line of duty by a mysterious bad guy. Dr. Dana Kingston needs to get out of the shadow of her well-known father, and decides to take her practice to the small town of Haven, Colorado, high up in the Rockies. Their first meeting involves a flat tire, the ubiquitous poor weather conditions of the setting, Kellen’s secret coffee recipe, and a rescue dog. (Bogart is a real hero through the whole book!)

The romance meets its first challenge when Kellen and Dana realize they’ll be working side-by-side on Haven’s Search and Rescue headquarters. What’s more, Dana has the unique challenge of an outsider entering a close-knit group of men and women who regularly risk their lives for one another.

One hazard of the setting and the subject that bothered me was some of the rescue victims dying. It may have been a realistic reflection of  the dangers faced by the SAR operation, but in two cases, there were dead kids. While I get that not everything turns out OK in the field in real life, the deaths gave the romance novel a gloomy cast.

Still, the appeal of the life-or-death teamwork lured me in, and Kellen and Dana’s strong chemistry and real relationship challenges kept me turning the pages.

The found family was the novel’s real strength. The richness of Haven’s community, the vibrant picture of the SAR center and the cabins were so vividly painted that I longed to vacation there even though I would have been too much of a wimp to even venture anywhere up the mountains. From coworkers at the SAR center to the neighbors in town, everyone came alive in the small, isolated community. AJ Qinn made me want to gain Kellen’s trust and make a home for Dana.  I wanted to sit by the fireplaces in the cabins and romp in fresh powder with Bogart. I wanted beer and wings at the local dive. And after it all, I wanted to be welcomed over to hangout with Dana, Kellen, and Kellen’s girls Ren and Cody. Each woman in the story, not just the main characters, have found their existing “birth” family to be anything from insufficient to actively harmful. In its stead, and oftentimes despite harrowing circumstances, they came together to make a family of their own choosing.

The FBI crashes into the insular world of Haven, demanding Kellen reveal who she was before Haven, so they can determine if there’s a connection there they can use to find the killer who’s after her and targeting other SAR teams across the country. I liked FBI Agent Grant, though I wanted to send him off to do some research or hire his own experts because he seemed to be flailing around in the dark for the majority of his investigation.

The investigation pushes Kellen to reveal secrets about her past that could have tied into the overall mystery, but ultimately felt forced. And while the reveal sheds light on her isolation, resilience, and nomadic past, it doesn’t connect to the overall plot as foreshadowed. What she running from all those years was an emotional threat and herself, not literal danger. I didn’t need Kellen’s past to connect to the mystery, but it would have made the two disparate parts of the story smoother if it had.

Kellen’s adopted runaways were great as windows into her secretive, sometimes cold and hard to reach character, but their own dark pasts also come up in an another odd red herring in the search for the mysterious shooter.

If you want to be immersed in the immediacy of Search and Rescue, give witness to very raw struggles for characters with painful pasts, and can handle the suspense of a sniper lurking in the snowy mountains, then Kellen and Dana’s romance will eat up your whole weekend. And hopefully you have a rescue dog like Bogart to keep you safe.

JJ Taylor loves stories about stories. She reads, writes, and chases chickens in the woods with her wife and their ridiculously adorable baby. You can find her on Twitter and on Tumblr @jjtaylor.