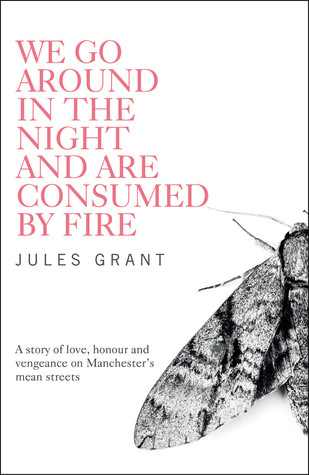 We Go Around In The Night And Are Consumed by Fire by Jules Grant is wonderful. It revolves around a group of lesbian gangsters in Manchester, which is the perfect intersection of two of my interests and my hometown in ways that I didn’t even know I wanted. Donna and Carla lead the Bronte Close Gang, an all-female and all-queer group of gangsters who sell drugs and work with other gangs in the area… Until Carla helps her lover, the wife of a rival gang-leader, escape an abusive marriage and gets killed in retaliation. From there, Donna has to try to keep her gang together, support Carla’s ten-year-old daughter Aurora, and get revenge for Carla’s death.

The story itself is tense and dramatic, although I don’t feel like it sticks its landing (Aurora’s storyline wraps up a little too easily, and the ending of Donna’s was actively disappointing in how it resolved.)
The characters are really well-handled; even the minor characters are built up from tiny details lthat layer and layer until the story ends up with a gang of fierce, supportive women who are well-described and well-built as characters. Donna and Aurora especially are so believable in voice and character – Aurora in particular feels like such a kid, trying to be responsible for the adults around her and messing it up because she is ten. Believably and convincingly ten, and her reactions to everything that happens breaks my heart. (She does make some unintentionally racist assumptions while trying to prove that she’s not racist though, fair warning.)

The relationships are amazing. Donna and Carla’s relationship is complicated because of all of the things they had and were to each other (there’s so much trust and love and history and frustration in their relationship) and all of the things they weren’t. Donna loves Carla painfully and can’t admit it; Carla adores Aurora; and the Bronte Close Gang are so close and protective of each other. Speaking of the gang; I was so delighted by the fact that the Bronte Close Gang is also part of a network of queer communities! I’m used to stories that have tiny queer communities, maybe half-a-dozen people at most? Even in the specifically queer lit! So having this beautiful network of groups and individual communities blew my mind, especially the moment when Donna put the call out and got such a response.

The narrative voice and style were my favourite parts, and they really worked for me. It is a very stream-of-conciousness narrative, which may not work for everyone. The entire book is in present tense and there is no speech marks at all; the dialogue is entirely woven into the narration ( never got confused about what was speech and what was narration, but your mileage may vary). The effect is quite lyrical, and feels a little like someone sitting down with you and just talking. Plus, the voices of this story sounded right to me, this was recognisably how my family and I talk. (I’ll be honest; I don’t live in Manchester any more, but reading this book made my accent revert like I’d never been away, and I don’t think I can praise a book’s voice higher than that!)

Jules Grant also writes very recognisably about Manchester; I knew so many of the places and streets the characters go through, and my specific part of Manchester even got a brief nod! I can’t speak to how it reads to someone who isn’t familiar with the city, but for me it felt very true to life.

I have seen concerns before that the inciting incident for the plot is the murder of a queer woman, but I think that We Go Around In The Night handles it the best it could be handled. Carla dies, but it is treated as the tragedy that it is. Plus, it doesn’t feel like a “Bury Your Gays” death; Carla’s death is not specifically because she’s queer, nor is she the only queer character in the story. All but maybe two of the adult women in this book are queer, which meant that Carla’s death didn’t feel like a point about queer characters and their role in fiction.

I genuinely enjoyed this book, and if you enjoy lesbian crime fiction with strong character voices, I definitely recommend it!