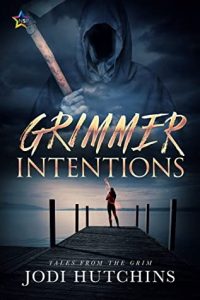 This is the second in the Tales from the Grim series. I picked it up not realizing it was the second book, so I recommend reading the first, because it felt like much of the story’s background was missing without it.

Although readers can pick up on who the characters are from the previous book without having read it, they still lack depth. Throughout the story, the strongest relationship dynamic happens between Margo and her adopted brother Luis. The rest tend to fall flat and rely on previous knowledge of the last novel.

The romance felt secondary to the plot, but that may be because it didn’t feel like there was much chemistry between the characters. Even if there had been build up in the first book, this one felt lacking in the connection that brought them together.

The politics and magic of the world were a more interesting plot. Again, it needed more development, as there wasn’t much background on Margo’s djinn heritage. It’s a world in which mixed-blood, paranormal beings are held in disdain, which could have made the story powerful as commentary on real-world issues. But it never delved far enough.

Despite its shortcomings, the novel did move at a fast pace and keep me intrigued. It’s well written and keeps you turning the pages. It shows there’s great potential for more from this world and this writer. I might go back and read book 1 to get the complete picture of these characters and their story.